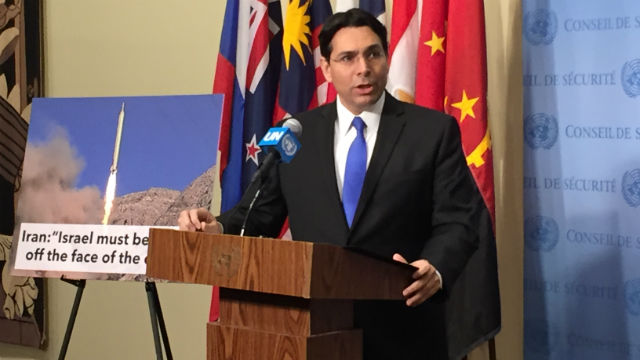 The glorification of Palestinian terrorists like Marwan Barghouti — the jailed Fatah leader who is currently leading a hunger strike — “not only distances us from peace, but dishonors the memories of the innocent victims,” Israel’s UN envoy Danny Danon declared on Thursday.

Danon was speaking at a monthly Security Council meeting on Middle East issues. Earlier, Palestinian representative Riyad Mansour told the council, “As we meet today more than 1,000 Palestinians are on hunger strike in non-violent protest of their captivity. This hunger strike is led by Marwan Barghouti, a Palestinian parliamentarian and leader, jailed for 15 years now.”

The 57-year-old Barghouti — the head of Fatah’s Tanzim armed wing and a founder of the al-Aqsa Martyrs’ Brigades — orchestrated a string of deadly terrorist attacks during the Second Intifada before being arrested in Ramallah by Israeli troops in April 2002.

Responding to Mansour, Danon said, “The leader of the striking prisoners is a terrorist and a murderer who has overseen dozens of suicide bombings and the killing of innocent civilians. Marwan Barghouti was arrested and tried in a fair and open trial. He was then convicted of direct involvement in the murder of five people.”

As reported by The Algemeiner on Wednesday, family members of Barghouti’s victims criticized the New York Times for its publication last weekend of a Barghouti-authored op-ed that initially failed to explain (a note was later added) why he was in jail for life.

Also at Thursday’s Security Council meeting — which was presided over by US Ambassador Nikki Haley, the council’s current president — Danon called out Iran for its regional activities.

“Iran does not only threaten our region through proxies, it does so directly as well as with its support of terror throughout the Middle East and their continued ballistic missile tests which are in direct defiance of this council,” he said. “The Iranians have not hidden their intentions. Just two days ago they wrote on one of their missiles: ‘Death to Israel.’”

In the Middle East, Danon continued, “where there is terror, where there is death, there is Iran. Tehran is an accomplice in the atrocities taking place every single day in Syria. The Iranian proxy Hezbollah places its weapons in homes, mosques and hospitals in Lebanon. And in Gaza, Hamas has spent millions of Iranian dollars on rockets, guns and digging terror tunnels.”