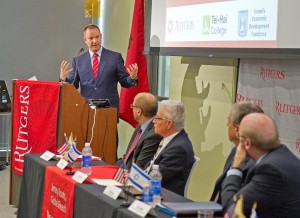 Israel’s leading role in medical-device, biotechnology and agricultural innovation is now expanding to the emerging science of functional foods.

A new collaboration between Rutgers University in New Jersey and Tel-Hai College in Israel’s Galilee region will focus on formulating advanced edibles to tackle obesity and to manage diabetes, food allergies and other nutrition-related issues spiking to epidemic proportions in developed countries.

The New Jersey-Israel Healthy, Functional and Medical Foods Alliance will support scientific research, technology commercialization, startup incubation and “a world-class business cluster for the development of the healthy, functional and medical foods industry” in both Israel and New Jersey, according to a memorandum of understanding signed on September 18 at the Rutgers Food Innovation Center, a business incubation and economic development program.

“Functional foods” are defined as having a health benefit beyond basic nutrition, while “medical foods” are meant to be consumed or administered under a physician’s care. The related field of botanical drugs, also to be explored through the academic and business exchange, consists of vegetable, plant, plant algae or fungi to provide health and medical benefits.

Many Israeli companies are involved in food-tech but not in a dedicated hub.

“This is an amazing new frontier. If I were still running JVP I’d make a major fund around functional and medical foods, and I hope others will do so,” said Margalit, speaking with ISRAEL21c from Boston, where he was meeting with potential investors in the public-private partnership.

“Israel’s high-tech expertise was instrumental in the communications, big enterprise and medical equipment era, and it’s about time we put this expertise to work in one of the biggest themes that the high-tech community needs to address worldwide: food and health.”

Margalit explains that the new initiative is the next step in his vision to develop seven “regions of excellence” in economically underserved parts of Israel. Each one has a different focus.

He’s already proven the concept in Jerusalem and Beersheva.

In Israel’s capital city, it took the form of a business, social and cultural hub surrounding JVP headquarters, including JVP Media Quarter, The First Station, Zappa nightclub and Bakehila-JVP Community.

In Beersheva, the focus was making the unofficial capital of the Negev into a global cybersecurity innovation center. The nonprofit CyberSpark Industry Initiative, based in the new Advanced Technologies Park in Beersheva, is a joint venture of EMC, JVP Venture Capital Fund and Ben-Gurion University’s technology transfer company.

“Just as we created an incentive package to bring multinationals like EMC, Cisco and Oracle to Beersheva through CyberSpark and now have 2,000 employees there in cyber-tech, we hope to bring multinationals such as Cargill, PepsiCo, GlaxoSmithKline, Abbott and others to the Galilee for food and therapeutic substances that they can create together,” says Margalit.

“Why partner with Rutgers? We needed a world-class university to partner with us, and New Jersey is a state that has both food and pharmaceutical companies trying to come into the technology phase. So in this joint venture, Rutgers and Tel-Hai are the basis and there will be more partners. It will give work to graduates of the colleges in the Galilee, while now they have limited employment possibilities.”

About a year ago, Margalit called a meeting of 20 mayors from the eastern Galilee, members of the regional business community, and administrators from regional institutes of higher education including Tel-Hai and Bar-Ilan University’s medical school in Safed (Tzfat).

“It was more complicated to create a master plan for the Galilee than it was for Jerusalem or Beersheva, because it’s all small villages and towns. My demand was that they get together and find what’s unique there, and they agreed it is agriculture, food and life sciences — each interesting on its own but not game-changing. When you put them together, it becomes a major initiative and something unique.”

Margalit envisions the Israeli government as an involved partner, perhaps issuing a tender for food-tech business incubators and matching investments from Israeli and international investors.

“We’ll turn this into a major government plan,” Margalit predicts. “We have a 70-page document that outlines every step of the way.”