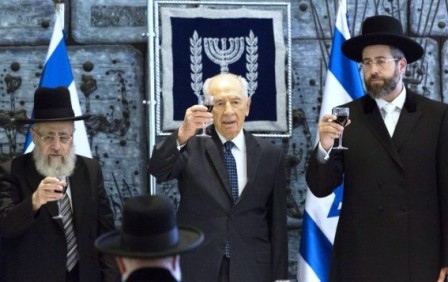 Israel’s two new chief rabbis were sworn in today at a ceremony held at the President’s Residence in Yerushalayim.

Ashkenazi Chief Rabbi Rav Dovid Lau and Sephardi Chief Rav Yitzchak Yosef were swron in by President Shimon Peres, committing to serve the people of the State of Israel a month after they were voted in by a committee comprised of 150 rabbonim, mayors, politicians, activists, and government appointees.

“We expect and hope that in the coming 10 years, we will indeed have the ability to give Torah instruction, to enlighten with the light of the Torah, and to be the mouth and ear for each and every person living in the country,” Rav Lau said.