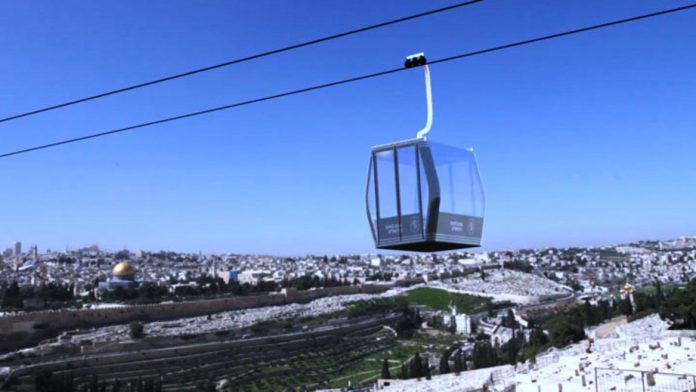 Imagine being able to exit Israel’s Ben-Gurion International Airport, hop on a fast train to Yerushalayim and within about 45 minutes, stand at the Kosel in the Old City. That day could come soon, but first Yerushalayim officials need to clear a few hurdles.

Former Israeli Transportation Minister Yisrael Katz announced in 2017 that he intended to extend Israel’s new fast-rail line, which currently only reaches the entrance to Yerushalayim, to the Old City, and to name the new station after U.S. President Donald Trump in honor of his having recognized Israel’s sovereignty over Yerushalayim.

Fleur Hassan-Nahoum, deputy mayor of Yerushalayim and in charge of foreign relations, international economic development and tourism, told JNS she believes that making Israel’s holy sites accessible to more people “can only be seen as a positive development.”

With more than 3.5 million people visiting each year, the Old City is surprisingly inaccessible. Its narrow streets prevent buses from entering, forcing all tour groups to park near one of several gates around the city, from which point visitors must then walk. Children, the elderly and the handicapped all must face numerous challenges and hurdles when trying to reach most parts of the Old City.

Israel’s government has resolved to fix this by developing alternate modes of transportation—a cable car and a fast train—that would bring all visitors directly to some of the Old City’s main attractions: the Kosel and the Har Habayis.

After numerous delays and malfunctions (not including current limitations related to COVID-19), Israel’s new fast train has finally started running on a regular basis between Yerushalayim and Tel Aviv, with a stop at the airport.

The train, which has been advertised as taking just 28 minutes to travel between Yerushalayim and Tel Aviv, significantly cuts down commuter time—once passengers are on it. Parking and then waiting for the train adds to that travel time.

“Any opposition to these infrastructural plans that will only advance tourism in our city and our country is purely political and totally impractical.”

In addition to the train, the Jerusalem Municipality, the Jerusalem Development Authority and the Tourism Ministry have been pushing for the construction of a cable-car system that would carry hundreds of passengers at a time between the First Station complex and the Old City.

But critics, including the pro-Palestinian Emek Shaveh organization, believe that the cable car and the train’s extension to the Old City are controversial and would touch on political sensitivities, as well as ruin the view, and are fighting to prevent both from being constructed.

Jordan, which administers Muslim Holy sites in Yerushalayim under an agreement with Israel, objected to the train extension, saying it violates international law.

The Israel Nature and Parks Authority (INPA), which according to its website “works to preserve and manage the special look of typical landscapes throughout the country” expressed to JNS its objection to the cable car since it would ruin the view of the Old City and opposed an extension of the railway line to the Old City, saying it was “discussed in the planning committee” and “could lead to huge damage and the drying up of the Gihon Spring.”

The Gihon is an ancient source of water that served Jerusalem’s ancient inhabitants for millennia and is today part of the City of David complex.

The INPA added that its opposition to the project is supported “by the opinion of an expert hydrologist.”

It also said that the spring is “very important for the three religions.” However, while the spring played a central role in the history of Judaism and Christianity, it’s unclear what its significance is to Islam.

The INPA questioned how the train line would avoid damaging antiquities underground, but was vague about whether the train station, the location of which has yet to be determined, could be built in an area that would not cause damage.

Israel’s Antiquities Authority has not objected to the idea of extending the fast train to the Old City and the National Planning and Building Council has approved the plan.

The train would need to travel through a two-mile long underground tunnel from the Central Bus Station at the entrance to Jerusalem to somewhere close enough to the Old City’s Dung Gate.

In contrast to the INPA’s position, Hassan-Nahoum said she is in favor of the new cable car and the rail-line extension, and has lobbied for both.

“Any opposition to these infrastructural plans that will only advance tourism in our city and our country is purely political and totally impractical,” she said.

In addition to the Jerusalem Municipality, Doron Spielman, vice president of the City of David Foundation, told JNS that while his organization is not involved in the process of building a train station near the Old City, he does “look with great favor upon any initiative put forward that is reasonable and that can bring tourism to the area.”

Spielman noted that the area of ancient Jerusalem, “which is a site of importance to 4 billion people throughout the world,” would attract both people who will come as tourists and people interested in supporting the State of Israel [online] from their homes.

“We encourage the state to continue to come up with creative ideas that will benefit the city of Jerusalem and the State of Israel as a whole,” he added.