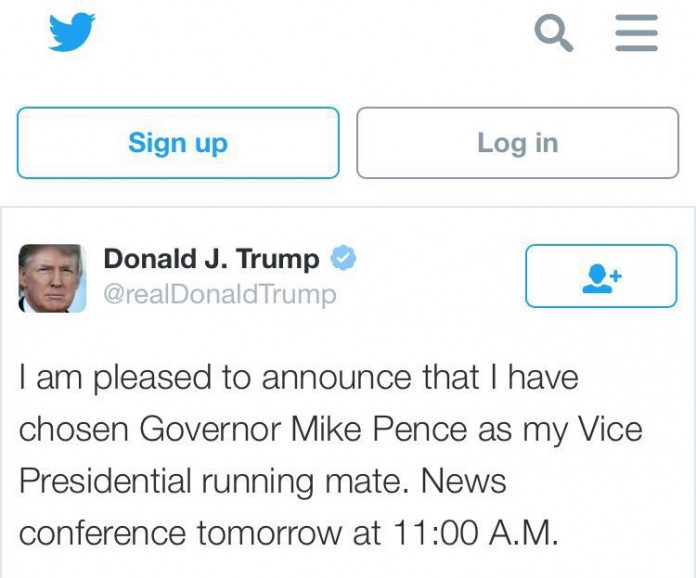 Donald Trump has called Indiana Gov. Mike Pence and officially offered him the vice presidential slot on his ticket.

And Pence has accepted.

This news follows unending reports and speculation yesterday as to whom Trump would choose between Pence and Former House Speaker Newt Gingrich.

Trump has now tweeted that Pence will be his vice presidential pick, followed by the first joint event tomorrow morning in Bedminster, New Jersey.

But speaking at a fundraiser in Los Angeles later in the evening, Trump said he had made his pick and the campaign was “ready to announce,” according to an attendee.

By early evening, Trump made the offer.

CNN adds that Trump had initially suggested he would wait until the Republican National Convention to unveil his vice presidential choice, but Indiana law forced his hand. Candidates can’t run for both federal and state office after July 15, meaning Pence had to withdraw his name from his re-election race for governor.

The selection of Pence will likely do little to drum up excitement among Trump’s base. It is what some pundits call a “safe pick,” but may not accomplish much in drawing swing voters over the Trump’s camp. A Gingrich selection, while riskier, would have likely created great interest in the ticket and more drama as the campaign moves along. Only time will tell what kind of impact Trump’s veep choice will have on this headline-grabbing presidential race.