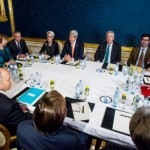 The news that 340 rabbis endorsed President Obama’s Iran deal made headlines around the world last week. Many people were surprised that so many rabbis would take such a stance.

In fact, they should have been surprised that the number was so low. A closer look at this episode shows that the Declaration of the 340 was, actually, a dismal showing for Jewish supporters of the Iran agreement.

In Israel, there is an extraordinarily broad right-to-left consensus against the Iran deal. Both Prime Minister Benjamin Netanyahu and left-wing opposition leader Isaac Herzog have strongly denounced it. Polls show that approximately 75% of Israelis are against the agreement.

Back in the United States, most of the major Jewish organizations oppose the agreement. The list of opponents includes AIPAC, the American Jewish Committee, the Anti-Defamation League, the Orthodox Union, and more than fifty local Jewish federations around the country. A few major organizations, such as the bodies representing Reform and Conservative Judaism, have not taken a stand. And some groups on the left, mainly J Street and Ameinu, support it. Polls of the community at large have produced widely varying results.

J Street has undertaken a massive lobbying campaign in favor of the agreement. As part of that effort, it recently secured those 340 rabbinical names. But what is not widely known is that the 340 represent only about one-third of J Street’s own rabbinical supporters. In other words, J Street could not even get a majority of its own rabbis to back the Iran deal.

In 2010, a left-wing Jewish organization known as Brit Tzedek v’Shalom (in English, the Jewish Alliance for Justice & Peace) announced that it was merging with J Street. This was widely reported as a major coup for the then-fledgling J Street, providing the new group with a base of considerable manpower. According to Brit Tzedek’s web site, “Brit Tzedek v’Shalom becomes the field arm of J Street, bringing 50,000 members and supporters, 38 chapters, and a rabbinic network of over 1000 clergy providing a strong foundation for J Street’s grassroots and rabbinic work.”

Overnight, J Street added 1,000 rabbis to its ranks (Brit Tzedek’s term “clergy” probably meant that the number included a small number of cantors). Presumably J Street already had some rabbis of its own. Yet out of this base of more than 1,000, J Street was able to get only one-third to endorse the Iran deal.

Of course, even if J Street didn’t have that base of 1,000-plus, the number 340 would not be very impressive. Remember: there are in the neighborhood of 5,000 rabbis in the United States. Seven percent is not exactly overwhelming.

And for those who are counting rabbis as a way of measuring sentiment in the Jewish community, here’s another number to consider. More than 1,000 rabbis have already signed an online petition against the deal, and the number is growing daily.

Many lessons will need to be learned when the debate over the Iran deal is done. One of them is that the American Jewish left is a paper tiger. Despite generous funding from George Soros and generous media coverage from The New York Times, J Street could not get more than one-third of its own rabbis to support its stance. That, in turn, is a sign of hope for those who were worried that American Jewish support for Israel is eroding. Clearly, it’s not. The numbers don’t lie.