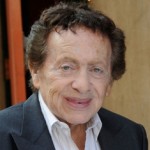 “We are united in saying that the negotiated deal on balance is good, that any available alternatives are worse, and that Congress killing the deal would be a tragic mistake,” wrote 98 Hollywood Jews in L.A.’s edition of the Jewish Journal a few weeks ago.

“They don’t know this deal from a piece of strawberry shortcake,” he said. “You could bet your life they didn’t read the deal… They support anything Barack Obama says or wants. If he said tomorrow, ‘We should invade Turkey,’ they say, ‘There’s a good idea.’”

They couldn’t care less. All they know is that he wants it so they want it also.

The truth of the matter is that when it comes to anything serious of any kind, they become morons.

I shouldn’t say this because it’s an insult to the morons.

Producers Norman Lear, Mike Medavoy and Lawrence Bender are among the group that has pledged its support to President Obama’s deal with Iran.

Mason is the second person in the industry to speak out about the 98 signatories, the first being Oscar-winning producer Gerald Molen, who argues lifting economic sanctions gives Iran enough money to develop nuclear weapons.

Molen asks in the emails, via The Hollywood Reporter.

How much of their new-found largesse will be used to kill innocents?

How much of it will be spent on child-size, bomb-laden vests for the indoctrinated young to climb on a bus, enter a marketplace or a theater and go boom?

Israel must be very wary and each of the signers must surely know that. Shouldn’t they?

Congress is set to vote on the Iranian deal Sept. 17, but President Obama is likely to ignore any override from Congress to give him the deal he wants.

Mason’s interview will air Sunday night on AM 970 The Answer in New York and NewsTalk AM 990 in Philadelphia.

Listen to an audio clip below: