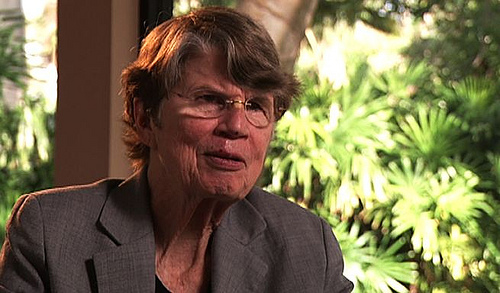 Janet Reno, the strong-minded Florida prosecutor tapped by Bill Clinton to become the country’s first female U.S. attorney general, and who shaped the U.S. government’s responses to the largest legal crises of the 1990s, died early this morning at her home in Miami. She was 78.

The cause was complications from Parkinson’s disease, her goddaughter, Gabrielle D’Alemberte, told the Associated Press. She was diagnosed with Parkinson’s in 1995.

Reno brought a fierce independence to her job. From the FBI siege of the Branch Davidian compound in Texas to the investigation into Clinton’s sexual relationship with intern Monica Lewinsky, she was adamant that her prosecutors and agents work outside of the influence of politics, media or popular opinion.

Her supporters believed she brought a heightened level of integrity and professionalism to the attorney general’s office. They admired her insistence upon legal exactitude from her employees, and praised her caution in prosecutions.

Reno resisted weeks of pressure to arrest sheik Omar Abdel Rahman, waiting until she believed agents had sufficient legal justification to tie him to the 1993 World Trade Center bombings. He was later convicted.

“She was a very powerful force for lawfulness,” said Walter Dellinger III, a Duke University law professor who served as solicitor general during Reno’s tenure. “She was always challenging to make sure there was a sound legal basis for what people were doing. And she was adamant about separating the department from politics.”

Business leaders criticized her lengthy prosecution of Microsoft on charges of anti-competitive violations – a case that ultimately ended in a settlement under the George W. Bush administration.

Civil libertarians took Reno to task for her handling of the espionage case against former Los Alamos scientist Wen Ho Lee, who was held in solitary confinement for nine months after being charged with mishandling nuclear secrets, only to be released on a lesser charge. Even Clinton said he was troubled by the case; Reno refused to apologize.

Republicans criticized her bitterly for pandering to the Clinton White House – she refused, for instance, to launch an independent investigation into whether Vice President Al Gore illegally fundraised from the White House during the 1996 Clinton-Gore reelection campaign. Democrats, meanwhile, disparaged her for abandoning her political patrons. Reno said first lady Hillary Clinton never forgave her for authorizing an investigation into the Lewinsky affair.

Reno remained in office longer than any other attorney general of the 20th century, and won high marks outside of the capital for her plain-spoken manner and folksiness: her preference for kayaking on the Potomac River to hobnobbing on Washington’s cocktail circuit; her oft-told childhood stories from the Everglades, with a mother who wrestled alligators; and her home in Florida with a family of peacocks, all named Horace.

A self-described “awkward old maid” who stood nearly 6-foot-2, Reno showed a willingness to lampoon her image. She joined actor Will Ferrell on NBC’s “Saturday Night Live” as he played a wooden version of her in a skit called “Janet Reno’s Dance Party.”

She was Bill Clinton’s third pick for attorney general. He had promised to nominate a woman for the post, but his first two choices – corporate lawyer Zoe Baird and New York federal Judge Kimba Wood – withdrew following allegations they hired illegal immigrants as nannies.

Reno, who had no children and therefore no nanny issues, came to the president’s attention through his brother-in-law Hugh Rodham, a public defender in Dade County and an admirer of Ms. Reno’s legal record.

When he nominated Reno for attorney general, the president noted that she kept her phone number listed – an unusual risk for a prosecutor. “She has lived the kind of life in real contact with the toughest problems of this country that I think will serve her very well as the nation’s chief law enforcement officer,” Clinton said.

Janet Wood Reno was born in Miami on July 21, 1938. Her father, Henry, spent more than 40 years as a police reporter for the Miami Herald. Her mother, the former Jane Wood, was an investigative reporter for the now defunct Miami News.

When Janet Reno was a child, the family moved into a home her mother built outside of Miami, on what then was the edge of the Everglades.

Reno graduated from Cornell University in 1960 and in 1963 from Harvard Law School, where she was one of a handful of women in a class of more than 500. After a stint at a small Miami law firm (she said larger firms passed her by because of her gender), she was hired to the Florida State’s Attorney office. The prosecutor’s administrative assistant, Seymour Gelber, assigned her to what he thought was the dead-end job of organizing the office’s juvenile division.

“It was an appendage nobody paid much attention to, so I sent Janet over there and figured she would dawdle around like everybody else and write another report,” Gelber told the Chicago Tribune in 1993. “Instead, she pasted the juvenile court together in about two months.”

Protecting children would remain a focus of Reno’s career. In speech after speech, she connected crime to poor social conditions such as poverty and a broken school system.

She was appointed Dade County State’s Attorney in 1978, and won five straight elections running as a Democrat in the predominantly Republican county.

Many minority residents blamed her for the 1980 acquittal of four white police officers accused of killing an unarmed black motorcyclist – a case that sparked race riots in Miami. More than a dozen people were killed, hundreds were injured, and then-Florida Gov. Bob Graham (later a U.S. senator) called in thousands of National Guard troops to keep the peace. Mobs reportedly shouted “Re-no!” as they set fires.

Clinton nominated Reno to the attorney general post in February 1993. At the time he praised her rock-solid integrity – a characteristic that led her to buy cars new, at sticker price, to avoid any appearance of impropriety.

Within a month of her appointment, Reno confronted a case that colleagues said would define the rest of her career: the standoff with followers of self-proclaimed prophet David Koresh at the Branch Davidian compound near Waco, Texas.

Koresh had already killed four federal officers and had withstood a weeks-long standoff with the FBI when agents asked Reno to authorize a raid of the compound.

She gave the go-ahead for the agents to storm the building with tear gas, she said, after being convinced that children were being abused inside. During the raid, a fire broke out and engulfed the compound, killing all 80 or so people inside. Later that day, an anguished-looking Reno stood in front of television cameras and took full blame.

“I made the decision,” Ms. Reno said. “I’m accountable. The buck stops with me.”

She later stood her ground during a House Judiciary Committee hearing, when Rep. John Conyers Jr., D-Mich., told her she was right to offer her resignation, saying, “I’d like you to know that there is at least one member of Congress that isn’t going to rationalize the death of two dozen children.”

“I haven’t tried to rationalize the death of children, Congressman,” she responded, glaring, her voice quavering. “I feel more strongly about it than you will ever know. But I have neither tried to rationalize the death of four agents, and I will not walk away from a compound where ATF agents had been killed by people who knew they were agents and leave them unsurrounded . . . Most of all, Congressman, I will not engage in recrimination.”

For the rest of Ms. Reno’s career, fringe groups pointed to Waco as evidence of the deadly misuse of federal force. Timothy McVeigh, responsible for the 1995 bombing of the Alfred P. Murrah federal building in Oklahoma City, which killed 168 people and injured scores more, reportedly saw Waco as inspiration for his terrorism.

Although personally opposed to capital punishment, Reno authorized her prosecutors to seek the death penalty against McVeigh. He was killed by lethal injection in June 2001, the first federal execution since 1963.

Late in her term as attorney general, Reno faced similar questions about federal force. The Miami relatives of young Elian Gonzalez, whose mother had drowned as the pair attempted to flee Cuba to the United States, refused to return the child to his father, who wanted to take him back to Cuba.

The saga of Elian held the country’s attention for much of early 2000, with Miami’s Cuban expatriate community adamant that the boy stay in the United States, a federal judge ordering that they return him to his father, and Reno flying to Florida herself to negotiate.

After the Miami family ignored Ms. Reno’s deadline for them to comply with the judge’s order, she authorized federal agents to enter their home and seize the 6-year-old. A photo of a SWAT-equipped border patrol agent appearing to point a gun at the young Gonzales in a closet became a much-reproduced image – a visceral symbol of the passions felt on all sides of the debate.

After stepping down from the attorney general’s office in 2001, Reno returned to Florida and the next year ran for governor. Despite her almost universal name recognition, party officials threw their backing behind Tampa attorney Bill McBride, reportedly because Ms. Reno had not sought their blessing before embarking on her campaign.

Reno narrowly lost the nomination; McBride subsequently lost to Jeb Bush, the son and brother of two Republican presidents, in the general election.

Over the next decade, Reno gave speeches about criminal justice issues, particularly as they related to children. She served on the board of the Innocence Project, the nonprofit organization that works to exonerate the wrongly convicted through DNA evidence.

When asked by reporters what she wanted to do after Washington, she said she wanted to read, garden, and perfect her Eskimo roll, a kayaking maneuver. As during her time in the attorney general’s office, she often said that hers had been an exciting, interesting, lucky life.

“I’ve had a thoroughly good time,” she told the Miami Herald in 1998. “I have the opportunity to serve my country and it’s been extraordinary, and if I go home, I go home.”