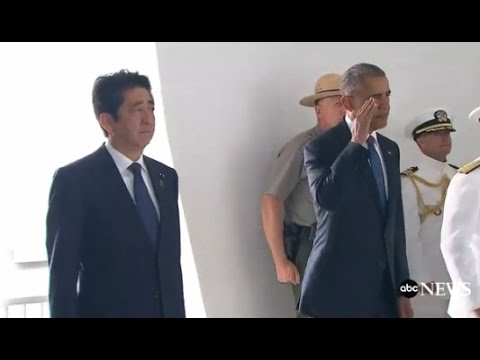 During a historic trip to Hawaii’s Pearl Harbor, President Obama and Japanese Prime Minister Shinzo Abe on Tuesday warned against repeating the “horrors of war.” Both leaders dropped purple flower petals into the water near the wreckage of the USS Arizona. The Japanese attack on the U.S. naval base 75 years ago killed more than 2,300 Americans and triggered the nation’s entry to World War II.

“As the prime minister of Japan, I offer my sincere and everlasting condolences to the souls of those who lost their lives here, as well as to the spirits of all the brave men and women whose lives were taken by a war that commenced in this very place,” Abe said at Joint Base Pearl Harbor-Hickam. Abe is Japan’s first leader to visit Pearl Harbor with a sitting U.S. president. Read more.