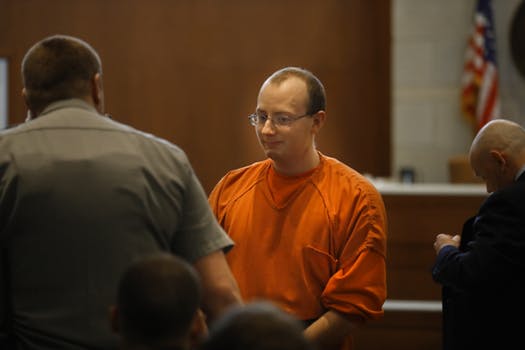 A man accused of kidnapping 13-year-old Jayme Closs from her rural Wisconsin home in the fall after her parents were killed has purportedly written a letter from jail saying he regretted the crimes and committed them “mostly on impulse.”

The letter supposedly from Jake Patterson, who was arrested in January after Closs escaped from his home, was sent to KARE 11 News reporter Lou Raguse in response to questions Raguse had mailed the inmate.

Wisconsin authorities have told the news station they believe the letter, postmarked Feb. 28, is authentic. The Washington Post has not confirmed the authenticity of the letter; Patterson’s attorney, Charles Glynn, did not respond to a request for comment Friday afternoon.

Police say Patterson confessed to stalking Jayme in October and to fatally shooting her parents, James and Denise Closs, at their home in Barron, Wisconsin, on Oct. 15. According to a police complaint, he then kidnapped Jayme and kept her captive at his cabin, about 65 miles to the north, for nearly three months – until she escaped on Jan. 10.

The letter seems to express remorse and confusion over the crimes, which set off a massive search for the missing teen and shook the state’s residents for months as they went unsolved.

“I knew when I was caught (which I thought would happen a lot sooner) I wouldn’t fight anything,” the letter says. “I tried to give [police] everything . . . so they didn’t have to interview Jayme. They did anyways and hurt her more for no reason.”

The letter claims that the writer planned to plead guilty later this month so her relatives wouldn’t have to “worry about a trial.” In response to various questions about his motives for carrying out such crimes, the letter writer told Raguse it was “not black and white.”

On the back of the letter, according to an image posted by KARE 11 News, are large bubble letters: “I’m Sorry Jayme! For everything. I know it doesn’t mean much.”

A full transcript and images of the letter are on the news station’s website.

Patterson has been charged with two counts of intentional homicide and one count each of kidnapping and armed burglary. He is being held at the Polk County Jail on $5 million bail.

The kidnapping and killings were publicized across the nation as a desperate search for Jayme unfolded over nearly three months. Only after her rescue would police detail the lengths Patterson had allegedly gone to keep the 13-year-old captive, as The Washington Post reported in January:

“The girl told police that Patterson would have her hide under his twin bed, stacking the area around it with tote bags, laundry bins and weights so that he would be able to hear or see if she moved,” The Post report said. “Police said she told them that ‘Patterson made it clear that nobody was to know she was there or bad things would happen to her.’ Guests had apparently come and gone to his house while she was under the bed, the complaint said.

“And he made her stay under the bed when he left the house, sometimes as long as 12 hours with no food, water or bathroom break, the complaint said,” the report said. “He struck her with a hard household object one time when she upset him, threatening that the punishment would be worse if it happened again.

“On Jan. 10, Patterson told her he was going to leave the house for five or six hours, the complaint said, making her crawl under the bed beforehand,” according to The Post report. “But after he left, Jayme moved the bins and weights away, put on a pair of his shoes, and walked out toward the road until she found a woman walking her dog. Jeanne Nutter told police that Jayme told her her name during the encounter. ‘I don’t know where I am,’ the disheveled girl told her. ‘He killed my parents.’ And, ‘Please help – I want to go home.’ ”

In the letter, the writer says he tried to control what Jayme saw on the news about her kidnapping while she was trapped in his cabin.

The letter notes that the writer was able to keep his family members from learning Jayme was at the cabin because he kept her hidden on Saturdays, the days his father visited.

“My family respects privacy so no one even went in my room,” the letter says.

The letter also accused the police of misrepresentation.

“The cops say I planned this thoroughly, and that I said that,” the letter says. “They’re really good at twisting your words around, put them in different spots, straight up lie. Little mad about that. Trying to cover up their mistakes I guess. This was mostly on impulse. I don’t think like a serial killer.”