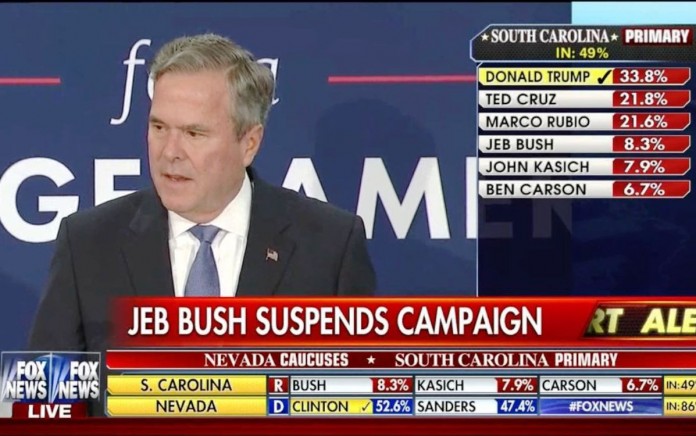 Jeb Bush, who sought to join his father and brother in winning the White House, has suspended his campaign for the presidency tonight after a disappointing showing in the South Carolina primary.

“Im proud of the campaign we won to unify our country, and to advocate consevative solutions,” Bush said. “…But the poeple of Iowa, New Hampshire and South Carolina have spoken.”

Bush’s decision followed a devastating loss in the Palmetto State, a state that handed both his father and brother crucial victories but that has shifted toward a much more strident form of Republicanism in the years since. Bush was also under intensifying pressure from party leaders to clear the field so they could coalesce around a challenger to Donald Trump.

The former Florida governor’s decision potentially frees tens of millions of dollars in financial support to other Republican presidential contenders. The most immediate beneficiary is expected to be Sen. Marco Rubio, R-Fla., who has ties to several of Bush’s top bundlers, many of whom have said that the senator is their second choice.

Bush’s departure also removes the most high-profile contender from the GOP’s “establishment” wing. While Bush has never lived or worked in Washington or held federal office, he was cast as a favorite of the party elite given his family lineage and close ties to many of the party’s most generous backers and senior leaders.

Bush’s decision ends a campaign that began with both great confidence and anticipation. After almost a year of private deliberation with close aides, he first hinted at a presidential campaign shortly after Thanksgiving in 2014 and quickly built a team that included several aides from his two terms as Florida governor and other seasoned advisers.

The new Bush team trumpeted a “shock and awe” strategy that methodically amassed an unprecedented amount of money for his campaign and an allied super PAC. Bush’s super PAC, Right to Rise USA, raised $118 million in 2015 to spend mostly on advertising attacking other GOP candidates.

The strategy forced former Republican presidential nominee Mitt Romney to accelerate his decision-making about another candidacy in 2016. But it didn’t deter potential rivals — most-notably Rubio, a one-time Bush protégé who proved to be a more capable campaigner than Bush.

Despite his commanding financial edge and early lead in polls, Bush was a technocrat in a world of noise. He obsessed over details of his exhaustive policy plans, but abhorred political stagecraft. He relished giving minutes-long answers to simple questions during intimate town hall meetings with voters, but struggled to give succinct answers in televised debates watched by millions.

Bush began slipping in public opinion polls last spring. He slipped further after struggling over four days in May to answer questions about George W. Bush’s decision to launch the Iraq war, an ordeal that exposed him as unable and unwilling to answer a broader question on the minds of many voters: Why should Americans elect another president named Bush?

During a May 11, 2015 interview on the Fox News Channel, Jeb Bush said that like his brother, he would have authorized military action against Iraqi dictator Saddam Hussein even though government intelligence used at the time was later deemed deeply flawed. Opponents in both parties quickly pounced, saying they wouldn’t have authorized the war. Some also suggested that Jeb Bush didn’t fully appreciate lingering, widespread opposition to the war.

The interview prompted voters to press Bush to explain his answer. First, he said he had misunderstood the question. Then he denounced the public’s focus on hypothetical questions. During an especially hostile exchange caught on camera after a rally in Reno, Nev., Bush sparred with a college student over whether George W. Bush or President Obama was responsible for the rise of the Islamic State terror group. A day later amid intense growing scrutiny, Bush conceded that “knowing what we know now” he wouldn’t have authorized war in Iraq.

Questions about his family lingered throughout the campaign, but he insisted several times that a presidential campaign “can’t be about the past; it can’t be about my mom and dad, or my brother, who I love. It has to be about the ideas I believe in to move our country forward.”

Al Cardenas, a longtime Bush friend, said last summer that Bush’s lead had shrunk because media attention was too focused on Bush’s family history and not on his record as Florida governor. “It’s about Bush, not Jeb,” he said.

Once people learned more about his time as governor, Cardenas predicted, “Then it will become more about Jeb, not Bush.”

In the end, though, Bush brought his family close to him. Former president George W. Bush joined his younger brother at a rally for him outside Charleston last week and his mother joined him on the trail for a final slog through South Carolina.

Bush also struggled to deal with Trump, who used television interviews, Twitter and campaign rallies to mock Bush in deeply personal terms. In a particularly stinging critique that stuck, Trump accused Bush – who lost 40 pounds before launching his bid and maintained an aggressive campaign schedule – of being a “low-energy” candidate lacking the stamina and demeanor needed to defeat Democratic front-runner Hillary Clinton.

Bush initially ignored Trump’s attacks, making him seem unaware of the quickly changing dynamics of the Republican Party. His muted response to Trump raised questions about whether a candidate who last ran for political office in 2002 was capable of operating in the modern political environment.

The mockery and personal nature of the attacks had roots in the often-tense relationship between Trump and the Bushes that dated to the late 1980s, when George H.W. Bush briefly considered picking the businessman as his 1988 vice presidential running mate.

Several times, Jeb Bush complained about the increasingly fast-paced, media-driven, hostile nature of American politics. After struggling through the first few televised debates, he admitted that he needed to embrace a new strategy contradictory to his patrician upbringing.

“I’ve had 62 years of life that’s been jammed into my DNA that when somebody asks you a question you’re supposed to answer it,” he told reporters after a campaign stop in Atlantic, Iowa in November. He added that “I’m learning the new art of acknowledging the question, being respectful of the questioner, of course, and then answering what’s on my mind.”

Over the course of his campaign, Bush rejected the tactics of tea party-backed lawmakers who had supported a shutdown of the federal government and opposed then-House Speaker John Boehner, R-Ohio, and other leaders. He had been a strong supporter of education reforms adopted nationally, commonly known as “Common Core” and wrote a 300-page book outlining his views on comprehensive immigration reform – views that put him at odds with many Republicans.

Before launching the exploratory phase of his campaign, Bush said in Dec. 2014 that the party nominee should be willing to “lose the primary to win the general without violating your principles.”

He vowed to campaign “joyfully,” saying that Republicans could only retake the White House if they reached out to voters who didn’t typically support conservatives. In the closing weeks of his campaign, he casat himself as a “steady hand” ready to be commander-in-chief.

“If you want a politician to just bob and weave, then I’m not your guy,” he told supporters Friday night in Central, S.C.

“You can’t talk trash when you’re running for president. … You can’t focus group things. You can’t be a poll-driven politician who runs away when things get tough,” he added in Spartanburg, S.C. on Friday.

Bush knew this, he said, because “I’ve had a front row seat watching history” made by his father, George H.W. Bush and his brother, George W. Bush.