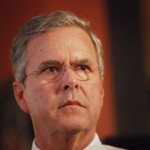 Jeb Bush is making it more personal than ever with Donald Trump, labeling the Republican presidential front-runner “a jerk” in a new TV ad released Thursday.

Politico reports that in the first frame of the commercial, titled “Enough,” shows a YouTube search of the phrase “Donald Trump is a Jerk.”

The 60-second spot then cuts to a shot of Bush telling supporters that Trump is a jerk.

In a bid to prove Bush’s insult, the ad then shows a CNN clip reporting how Trump allegedly made fun of New York Times Serge Kovaleski, who has a disease that restricts the movement of his arms.

“You gotta see this guy. Ahh, I don’t know what I said,” Trump says as he is shown shaking his arms.

A split screen shows a headline that Bush and a boy with cerebral palsy dined together before a campaign rally.

“I have a 12-year-old son who’s handicapped. He has cerebral palsy, and [what Trump did] just made me so angry,” the boy’s father says.

“And I told my wife I just couldn’t let that stand. I had to do something, make sure Donald Trump wasn’t the nominee for the Republican Party.”

Bush is then seen interacting with other disabled people, before being asked why he called Trump “a jerk.”

“I think life is truly a gift from God, and we’re all equal under God’s watchful eye — that’s what I believe,” Bush explains.

“And when anybody — anybody — disparages people with disabilities, it sets me off. That’s why I called him a jerk. What kind of person would you want to have in the presidency that does that?”

“Enough” is the second negative ad from Bush this week, following a Bush super PAC anti-Marco Rubio spot that calls him a flip-flopper on issues to the tune of the Nancy Sinatra hit “These Boots are Made for Walking.” The word flipping is substituted while an actor in cowboy boots portraying Rubio dances.