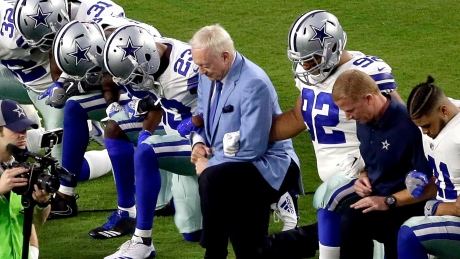 Cowboys owner Jerry Jones said after his team’s loss Sunday to the Green Bay Packers that he expects his players to stand for the anthem without expressions of protest.

“If we are disrespecting the flag, then we won’t play. Period. Period,” Jones told reporters (via the Dallas Morning News). “We’re going to respect the flag.”

“We cannot in the NFL, in any way, give the implication that we tolerate disrespecting the flag,” he added. “We cannot do that.”

Jones said he did not see two Cowboys players, Damontre Moore and David Irving, raise their fists as the anthem concluded Sunday. When apprised of that, he said that while “we as a team are very much on the page together,” players and coaches will “under no circumstances” fail to “stand and recognize and honor the flag.”

The owner made reference to Vice President Mike Pence saying he left the 49ers-Colts game earlier Sunday in Indianapolis because of protests by players during the anthem.

“I’m saying our vice president of the United States, if in his opinion there’s disrespect of the flag, then he should . . . express himself however he wants to,” Jones said. “He’s got rights, too. So however he wants to do it – he felt that not standing for the flag is disrespectful. I do, too.”

The NFL Players Association released a statement Sunday that its members “are union members and part of the labor movement that has woven the fabric of America for generations,” adding, “Our men and their families are also conscientious Americans who continue to be forces for good through our communities and some have decided to use their platform to peacefully raise awareness to issues that deserve attention.

“It is a source of enormous pride that some of the best conversations about these issues have taken place in our locker rooms in a respectful, civil and thoughtful way that should serve as a model for how all of us can communicate with each other,” the NFLPA continued. “We should not stifle these discussions and cannot allow our rights to become subservient to the very opinions our Constitution protects. That is what makes us the land of the free and home of the brave.”