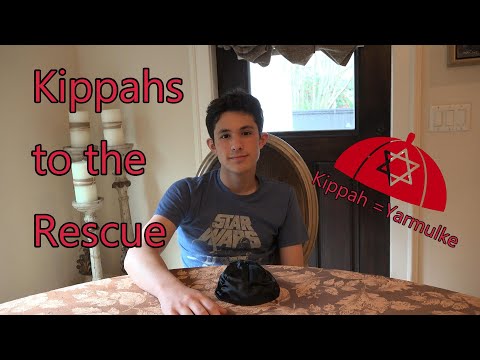 A Jewish family in Houston is turning yarmulkes into face masks for their town’s homeless population to wear during the coronavirus pandemic.

The Jason family has already collected nearly 700 from donations and has dubbed their campaign “Kippahs to the Rescue.”

The family has collected many yarmulkes from various events over the years.

“We decided to put them to good use,” said teenager Matthew Jason, the youngest of three brothers. He and his brother Jeremy were already volunteering every Friday in downtown Houston with the organization Food Not Bombs, a nonprofit that feeds the hungry, before they started their new effort.

The family’s synagogue, Congregation Brith Shalom, is helping to collect yarmulkes and set up a drive-through collection box at the temple so congregants could drop off unwanted ones.

To make the face masks, the family has been sewing six-inch elastic strips to both sides of a kipah to anchor it around the ears. They later switched to clipping the bands since it is faster and just as sturdy. Food Not Bombs is helping hand out the masks to those in need.

“My parents, brothers and I worked very hard to sew elastic bands on them. It was so great to see how I was able to help out, and people were so appreciative,” said Matthew. “There’s a lot of people out there that really need help and anything can help even in the smallest way.”