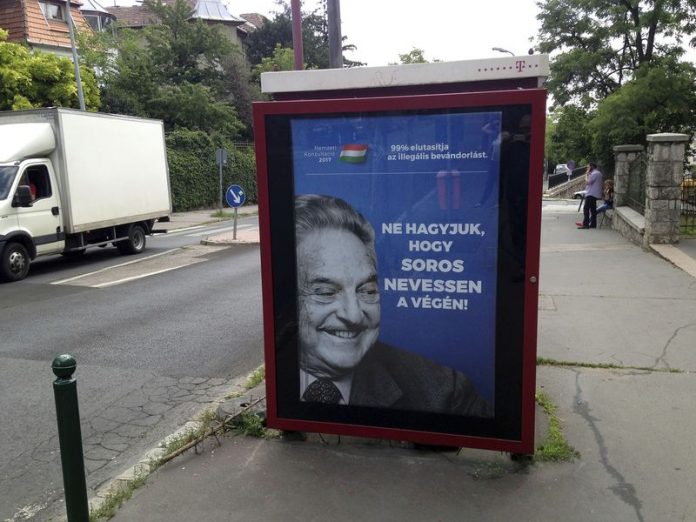 Hungary’s main Jewish organization has demanded the removal of government billboards targeting U.S. investor George Soros after they were defaced with anti-Semitic slander in several places.

The billboards, posted nationwide, show a smiling Soros next to the caption “Let’s not allow Soros to have the last laugh.” Anti-Semitic slander written on the posters in Budapest and other cities “recall Hungary’s dark periods,” Andras Heisler, president of the Federation of Hungarian Jewish Communities, wrote in an open letter to Prime Minister Viktor Orban on Thursday.

“The billboard campaign, while not openly anti-Semitic, can still very much unleash uncontrolled anti-Semitic and other feelings,” Heisler said. “This poisonous message hurts all of Hungary.”

The government rejects that its attacks on Soros are enabling anti-Semitism, on which it has a “zero-tolerance policy,” Janos Lazar, the minister in charge of the prime minister’s office, told reporters in Budapest. He said Soros’ stance on immigration — and not Soros personally or his Jewish origin — is the target of the billboard campaign.

The Soros billboards are the latest attack on the financier in his native Hungary, where Orban has singled him out as a target for opposing his anti-immigration position and for supporting organizations, such as ones working for human rights and government transparency, that he said are out to undermine his power.

Orban’s lawmakers last month approved legislation targeting foreign-funded non-governmental organizations after earlier calling for “sweeping out” Soros-funded groups. The measure followed another bill threatening to shut down the Soros-founded Central European University in Budapest. A resolution by the European Parliament this year said Orban’s government was a “clear risk of a serious breach” to the rule of law.