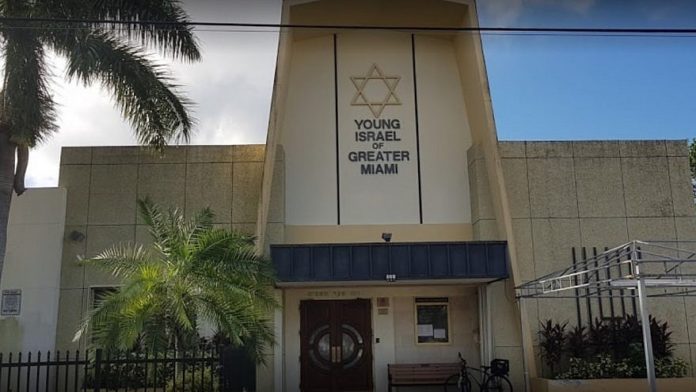 A driver passing by the Young Israel of Greater Miami around 6:30 p.m. on Sunday night fired six shots at Yosef Lifshutz, 68, with four of them striking him the leg. A volunteer of Hatzalah, the nonprofit emergency medical service organization, was reportedly at the synagogue and helped the victim. Lifshutz was taken to Aventura Hospital and Medical Center, where he underwent surgery.

Farley Weiss, a representative from the National Council of Young Israel, told JNS that Lifshutz remains in the hospital and is “making good progress.” His brother is with him.

“There clearly is a major concern that the shooting of this shul-goer at the Young Israel of Greater Miami is a hate crime,” said Weiss. “It’s taken very seriously by the Young Israel of Greater Miami and National Council of Young Israel, and by the Jewish community as a whole. We hope that the person or persons who did this will be apprehended very quickly because clearly there’s heightened tensions until that happens, and that we can come up with a better system to help prevent these types of shootings. Prayers are going out for him.”

“The investigation has to run its course, but anytime that someone is shot sitting outside a synagogue, it’s going to create fear in the Jewish community,” synagogue member Yehuda Kaploun told Florida’s Local 10 News.

The motive for the shooting remains unclear.

Miami-Dade Police Department detective Alvaro Zabaleta told news outlets the attacker got out of a black Chevrolet Impala and opened fire. Detective Angel Rodriguez told JNS it is too early in the investigation to determine whether the shooting was a hate crime, though the police department is investigating.

‘An important member of our congregation’

Friends and congregants at Lifshutz’s synagogue reacted to the shooting at the synagogue, saying that he was an important member of the community.

They said Lifshutz was sitting on a bench outside the synagogue, waiting to escort the elderly Rabbi David Lehrfield in for afternoon prayer services when he was shot. The rabbi of the synagogue described Lifshutz to Miami’s WSVN news station saying, “He’s a wonderful person. Everybody loves him.”

Congregant Koby Litowich, a board member of the synagogue who saw the shooting took place, called the incident “scary [and] terrifying,” and said that Lifshutz “helps out on a regular basis. He volunteers. He helps the rabbi. He’s an important member of our congregation.”

Jewish organizations reacted quickly to the shooting, which comes at a time of heightened concern regarding anti-Semitism and safety at synagogues following the deadly attacks in Pittsburgh and Poway.

Sara Gold Rafel, executive director of the southeast division of StandWithUs, told JNS, “StandWithUs is horrified by this shooting, and our thoughts are with Yosef Lifshutz and his family as we wish for his speedy recovery. We hope the authorities are able to apprehend the perpetrator as soon as possible, and determine whether or not this was yet another hate crime targeting Jews at a synagogue.”

Yaakov Hagoel, vice chairman of the Jewish Agency, said, “I call upon the U.S. authorities to put an end to the wave of anti-Semitic terrorist attacks that are being perpetrated against Jews in the United States. It’s time for Jews to be able to live their lives like any other citizen.”

Rabbi Rick Jacobs, president of the Union for Reform Judaism, said that “we are saddened but cannot be surprised any more when a Jewish person is shot in front of a synagogue this time in Miami. We pray for his recovery as we intensify our efforts to keep our entire Jewish community safe.”

The incident comes almost five years to the exact day after Rabbi Joseph Raksin of Brooklyn, N.Y., was killed as he walked to the Bais Menachem Chabad synagogue in Miami Beach, just two blocks from the Young Israel.

Damon Salzman, president of Young Israel of Greater Miami, posted a message on the synagogue’s Facebook page in which he called the shooter a “bully.”

He wrote, “It does not take a criminal mastermind to shoot an elderly person sitting on a bench. It does not take terrorist to try and kill someone isolated and defenseless. It takes a coward. It takes someone without courage to attack an elderly defenseless man sitting in front of a place of sanctuary. It takes someone devoid of humanity to perform such a disgusting and repulsive action.”

“Now is the time to act as a hero. … A hero is someone who does what is required especially when it is neither the easiest, nor the most enjoyable, nor the most popular thing to do.”

“Our first course of action is to take care of the man who was shot,” he added. “Our second course of action is to have cool heads. Not to react like we would first want—with righteous indignation and suspicion and perhaps violence. Rather, to pursue a stronger collaboration between the leaders of our community, our synagogues and schools, and the local law enforcement not only to bring this villain to justice, but to help prevent future crimes as well.”

He concluded by saying that the well-respected security agency Community Security Organization has assembled a program to help train members and coordinate security among Jewish institutions.

Salzman said, “This endeavor can only work if every organization is invested in its success. We can work together to try and prevent another senseless tragedy. Together as a neighborhood, as a community, we can be stronger.”