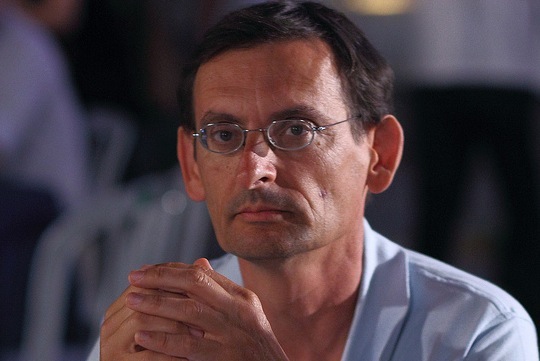 Sky News cited the only Jewish member of the Knesset’s Joint Arab List party, Dov Khenin, as accusing Israel of ethnic cleansing in its destruction of illegally built Bedouin and Palestinian homes and buildings in Area C of the West Bank, which is under full Israeli authority. Unlike “genocide,” which implies the murder of an ethnic group, “ethnic cleansing” implies the homogenization of an area by forcing certain ethnic groups to move out.

Israel denied the canard, telling Sky News, “The civil administration, by its power, takes enforcement measures against any sort of illegal construction in Area C.” Indeed, it is precisely to avoid such accusations that Israel regularly destroys illegal Jewish outposts and housing in the West Bank as well.

“The only ethnic cleansing being carried out is in his delirious mind,” Nava Boker of Likud told Army Radio. “With his deceitful expressions he is joining a long line of Jews throughout history who bolstered anti-Semitic propaganda with false claims. It is not surprising that Khenin, a member of the communist party, is joining the attempts to harm Israel. In my opinion, he lost touch with reality a long time ago.”

Khenin’s Hadash party was founded by the Israeli Communist Party (Maki) in 1977 to “unite most of the supporters for peace, equality, democracy and workers’ rights, Jews and Arabs” in the “the unique demand for the evacuation of all the territories which were occupied in June 1967 and the establishment of a Palestinian state alongside Israel” as well as a slew of social policies.

UN fieldworker Matthew Ryder claimed on Sky News, “Between 2010 and 2014, Palestinians in the area that Israel controls only managed to obtain 33 permits for building on their land. That’s something like 1.5% of the permits that are actually granted.”

But Motti Yogev of Bayit Yehudi, chairman of the Foreign Affairs subcommittee on Yehudah and Shomron, spoke of Arab “construction terrorism.”

He cited a comptroller’s report which found that 75% of illegal construction in Area C is done by Arabs, much of it with the help of the EU, while the Arabs are a minority there of between 70,000 to 100,000 compared to 400,000 Jews. Only 10% of illegal Arab structures receive demolition orders, the comptroller’s report said, and not all orders were carried out.