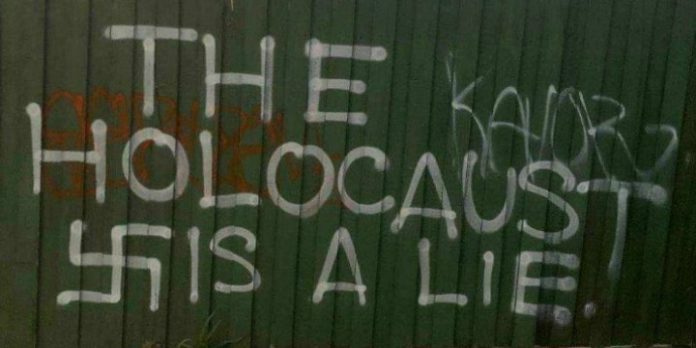 A Jewish-owned café was defaced with violently antisemitic and Holocaust denial graffiti in the Australian city of Melbourne.

According to the Australian Jewish News, the owner of the Aliza’s Place Café found the graffiti when she came to work Thursday morning.

The graffiti read “The Holocaust is a lie” and included a swastika.

The owner, Aliza Shuvaly, was shocked by the vandalism and said she “started to shake” when she found it.

“All my family were Holocaust survivors — my mother’s parents, my husband’s parents — and for me it’s hurting twice,” she said.

Shuvaly removed the graffiti herself, saying, “I won’t let them have the satisfaction of having it on my wall.”

Despite the shock, Shuvaly sounded a defiant tone, saying, “I couldn’t close the cafe. It’s not going to break me as a Jew. I’m not sure if I’m the target or just because we are Jewish.”

Asked what she would say to the vandals should she have the opportunity, Shuvaly said, “They need to move on with their lives, it happened a long time ago, we won’t let history come back.”

Dvir Abramovich, chairman of the Anti-Defamation Commission, which fights antisemitism in Australia, commented, “We need to make sure that we do not reach the point where Jews in Victoria will not feel safe walking the streets or in their businesses, yet the recent surge in hate and white-supremacists activity in our state, which is hitting an all-time high, is causing many to feel this way.”

“These bigoted thugs and their cowardly attempts at intimidation must not go unchallenged,” he added, “and I hope … those responsible for this crime will be dealt with to the full extent of the law.”