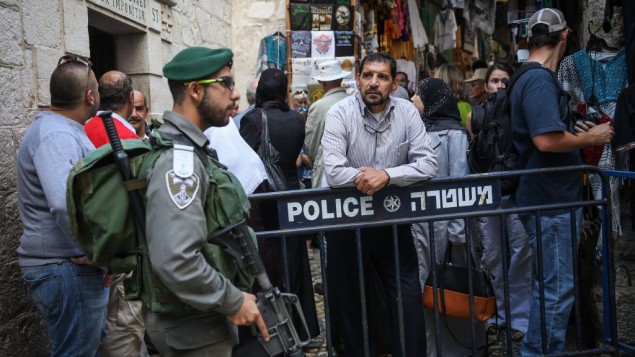 Police have instructed that Jews are forbidden to pray not only on Har Habayis, but also in the entire Muslim Quarter of the Old City. This was in response to a query of the right-wing Honenu legal aid organization as to why police had arrested three girls who were praying far from Har Habayis at the Old City’s Lions Gate.

On this basis, Justice Yael Yitav banned the three girls from the Muslim Quarter, from Har Habayis and from within twenty-five meters (approx. 82 ft.) of its gates for fifteen days.

Honenu complained that this new rule is a violation of freedom of movement and an exploitation of police authority. Thirty-five Jews were arrested for praying on Har Habayis or at one of its entrances during the preceding month.

Chief Rabbi Rav Yitzchak Yosef noted during a night of study devoted to the memory of Rav Avrohom Yitzchok Hakohein Kook, whom religious Zionists regard as their guiding gadol, that Rav Kook opposed ascending to Har Habayis, as did most authorities of his time. He suggested that whoever contravened their ruling should use Elul to repent.

Rav Yosef added that Rav Kook never jumped at leniencies for agunos as some modern rabbis do, nor was he lenient in conversions, and he demanded gender separation in youth groups and schools.