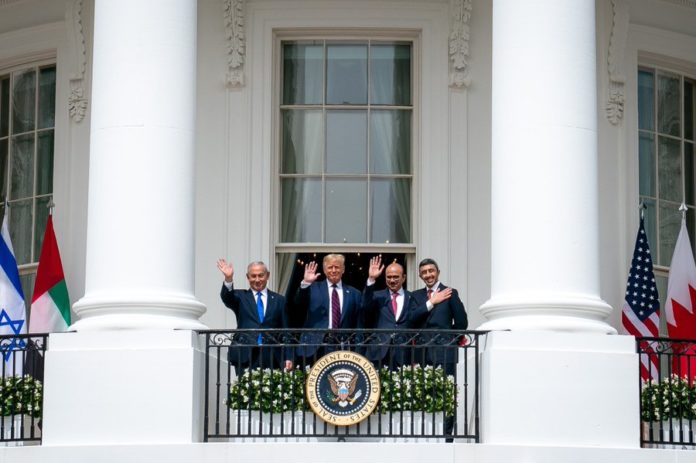 Jewish and pro-Israel groups applauded the United Arab Emirates and Bahrain for signing historic agreements at the White House on Tuesday to normalize relations with Israel, the first Persian Gulf nations to normalize ties with the Jewish state.

The American Israel Public Affairs Committee called the ceremony “a historic event in the advancement of peace and reconciliation in the Middle East.”

“Today’s ceremony sends a clear message that it’s a new era for Israeli-Arab relations. Peace in the region is possible through diplomacy, mutual recognition and negotiation,” said AIPAC. “We hope other nations in the Middle East and the Palestinian leadership will follow this inspiring example to bring conflicts in the region to an end and promote prosperity and cooperation.”

“The historic agreements signed today show that peace is on the march and the so-called Arab-Israeli conflict is increasingly an anachronism. Israel is strong and flourishing, and the Arab world is coming to see the Jewish state not as a foe, but as an ally against Iran and a partner for peace and prosperity,” said Christians United for Israel (CUFI) chairman Pastor John Hagee in a statement. “It is my sincere hope and prayer that other Arab nations will follow the UAE and Bahrain’s lead, and that the Palestinian leadership, in particular, will accept that peace with Israel is the only path forward.”

In a statement, the Conference of Presidents of Major American Jewish Organizations said that the Abraham Accords “mark the start of a new phase in relations between the Jewish State and the Muslim world. These landmark understandings represent a realignment, a paradigm shift wherein peace is prioritized over conflict. In becoming the third and fourth Arab countries to establish full diplomatic ties with Israel, the UAE and Bahrain lead the way for others to follow.”

President of the American Zionist Movement Richard Heideman told JNS that the occasion was a “historic breakthrough for Israel and her relations with not only the United Arab Emirates and Bahrain, who have signed agreements today at the White House, but for the future of Israel, Zionism and the Jewish people with all people.”

He added that “we are witnessing another significant achievement on the road to Middle East peace and an important step towards establishing a better day for Israel and all her Arab neighbors. We hope that the day will come when the Palestinian Authority itself will be prepared to achieve a permanent peace with the State of Israel for the benefit of all people in the region.”

Sarah Levin, executive director of JIMENA: Jews Indigenous to the Middle East and North Africa, expressed to JNS hope that these deals are “a meaningful first step towards warm, active relations between Israel and other countries throughout the Middle East region” in that “peace and normalization should be preferred to the alternative, and this exciting development gives us a renewed feeling of hope and optimism.”

“NORPAC strongly applauds the Abraham Accords signing at the White House. The agreements between Israel and the United Arab Emirates and Bahrain represent a diplomatic breakthrough for the Middle East and a remarkable achievement in United States diplomacy,” the organization’s executive director, Avi Schranz, told JNS. “These agreements will serve to further halt Iran’s aggression and improve Israel’s security.”

“The Abraham Accords show the world that Jews and Arabs can live, work and grow together in the Middle East,” Bryan Leib, chairman of HaShevet, told JNS. “The leaders of Israel, the Kingdom of Bahrain and the UAE have taken this bold step forward, and it’s our sincere hope that this fast-tracks peace in the Middle East between Israel and all Arab neighbors.”

B’nai B’rith International Daniel Mariaschin emphasized to JNS that the “importance of today’s signing ceremony cannot be overstated,” and that the Arab-Israeli conflict “is becoming undone one country at a time. This holds great promise for Israel and its neighbors, but also sends an unmistakable message to those who desire to undermine normalization that the future is not in their hands.”

“The Middle East is the heartland of Jewish history, the home to our prophets, historical and holy sites,” he said. “Greater Sephardic Jews, whose roots are in Muslim lands and now constitute more than 50 percent of Israel’s population, were once one of a plethora of peoples who made Cairo, Tyre, Aleppo and Baghdad bustling hubs for trade and innovation.”

Not all Jewish and pro-Israel groups were as positive about the development.

“While we welcome openings between Israel and Gulf states, we see the signing ceremony for what it is—a recklessly planned foreign-policy stunt driven first and foremost by Trump’s political calculations, and a potential security risk to Israel given Trump’s reported plans to sell advanced fighter jets to the UAE,” said Halie Soifer, executive director of the Jewish Democratic Council of America, in a statement.

While the Israel-UAE deal calls for cooperation in areas such as tourism, commerce and health care, Israel has objected to the United States giving F-35s to the UAE.

However, in a statement, Republican Jewish Coalition executive director Matt Brooks said that the Emirati and Bahraini normalization deals with Israel demonstrate that “the countries of the region are moving towards real peace with Israel,” and that following  “decades of failed diplomacy and bloodshed, the Middle East is at the dawn of a historic moment when Israel and its neighbors will benefit from cooperation in trade, security, technology, and other fields that will make life better for all the peoples of the region.”

Asaf Romirowsky, executive director of Scholars for Peace in the Middle East, told JNS that the Abraham Accords “debunked” the “conventional orthodoxy of Israeli-Arab relations that all roads must go through Ramallah.”

Moreover, said Romirowsky, the signing of the accords “should finally convince the Palestinians that notwithstanding their diplomatic temper tantrums, their strategy of insisting that all peace agreements between Israel and Arab countries be conditioned on a prior agreement between the PLO and Israel has failed.”