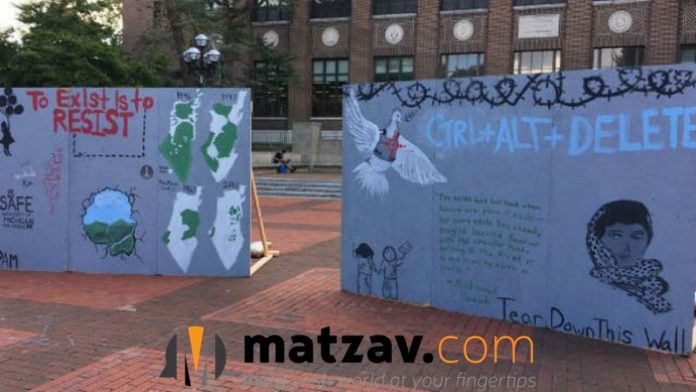 Jewish students at the University of Michigan were “deeply offended” that an “apartheid wall” and mock Israeli checkpoints were allowed to be erected on campus during the high holiday of Rosh Hashanah, the student newspaperThe Michigan Review reported on Wednesday.

According to the report, the structures — assembled by the anti-Israel group Students Allied for Freedom and Equality (SAFE) as part of Palestine Awareness Month — outraged those members of the Jewish community who remained on campus during the holiday and were “left to cope…without the support of many of their peers,” who were away observing the holiday.

According to the report, SAFE needed to receive advance permission from the school to hold the “apartheid” event, “suggesting that the university initially saw no problem” with  it.

In response, students launched a petition calling on the school’s president, Dr. Mark Schlissel, to condemn the event and its props.

Just last week, you sent a message to the student body emphatically stating that “behavior that seeks to intentionally cause pain to members of our community is reprehensible.”

We speak on behalf of many students in the Jewish and pro-Israel campus communities and we write that yesterday we felt ostracized and excluded as many of us sat in synagogue unable to share our stories.

The petition asks Schlissel to issue a similar statement in support of Jewish and pro-Israel students.

This is not the first time SAFE has sparked controversy at the University of Michigan. In 2015, the group filed an ethics complaint against a Jewish member of the student government, after he voiced criticism of an anti-Israel protest. Following a probe, the Central Student Government decided it would not seek disciplinary measures against him.