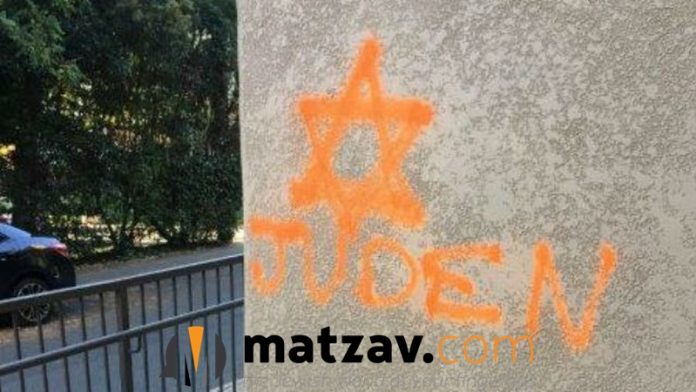 Jewish students at the University of Virginia (UVA) expressed shock over the appearance of Nazi-style graffiti on the wall of a popular apartment complex over the weekend, the college newspaper the Cavalier Daily reported.

According to the report, among the Holocaust imagery spray-painted on the wall was a Star of David over the word “Juden,” German for “Jews,” and a pentagram with the word “Satan” scrawled next to it.

Jordan Fingerhut, a UVA junior, told the newspaper she was “horrified” by the defacement, which has since been cleaned up. “I’m a Jewish student here…and I can’t believe that members of our community or members of the area would vandalize and write something so hurtful and so antisemitic,” she said.

In a joint statement, UVA’s Jewish Leadership Council and Student Council condemned the graffiti, which they labeled a form of hate speech, calling the incident part of a “disturbing pattern of prejudice that affects Jewish members of our community.”

The statement read, in part:

This symbol is reminiscent of the mark placed on stores owned by members of Germany’s Jewish community during the time of the Third Reich. It was meant to single out these shops and ostracize members of the Jewish faith. The continued use of this symbol draws on memories of Nazi Germany to incite fear. Even while significant progress has been made in the United States to promote tolerance, antisemitism persists.

UVA Hillel said in a statement that it is “grateful and heartened” by the response from the school and the wider campus community to the graffiti.

“While we are deeply saddened and concerned by this antisemitic act, the University of Virginia has a strong and vibrant Jewish community… Today, UVA is a welcoming and safe community for Jewish students, which makes this act all the more jarring. This type of hate has no place at our University,” the statement read.

Dean of Students Allen Groves notified the UVA student body of the graffiti in an email, which was obtained by The Algemeiner, on Sunday. Groves wrote that the vandalism “is designed to target and intimidate individuals of the Jewish faith. Although the GrandMarc [apartment complex] is private property, it also represents the home of a great many students. As a community, we categorically reject this type of hateful message, which is anathema to our shared values of inclusiveness and trust,” he stated.

The UVA incident is part of a trend plaguing college campuses. During the Jewish High Holidays, three swastikas were found painted on white boards outside student dorm rooms at Seattle University. Earlier this month, as The Algemeiner reported, leaked security footage from Santa Clara University showed two students defacing a dorm elevator with a swastika scrawled in blood.