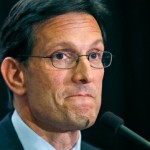 In one of the most stunning primary election upsets in congressional history, the House majority leader, Eric Cantor, was soundly defeated on Tuesday by a Tea Party-backed economics professor who had hammered him for being insufficiently conservative.

The result delivered a major jolt to the Republican Party – Mr. Cantor had widely been considered the top candidate to succeed Speaker John A. Boehner – and it has the potential to change both the debate in Washington on immigration and, possibly, the midterm elections.

The result is seen as a defeat for the Jewish world as well, as Cantor is a good friend of the Jewish community and of Israel.

“I’ve had the privilege to know and work with Eric Cantor since his first days running for the House of Representatives,” said Diament. ” He is a friend and has been a critical partner for the advocacy work of the Orthodox Jewish community on issues ranging from Israel’s security and the security of Jewish institutions in the United States; to religious liberty; to educational reform; and to defending the needs of the nonprofit sector. In all these Eric has been a champion.”

Diament added: “Moreover, he has truly been the model in the Congress of a ‘distinguished gentleman’ or, in Jewish parlance, a ‘mensch’. He will be sorely missed. We wish him and his family God’s blessings in his future endeavors.”