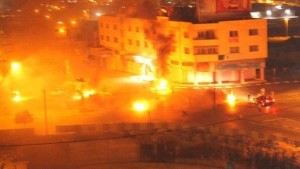 Jewish Israelis were lightly wounded overnight in a confrontation with Palestinians at Kever Yosef in She’chem. They were eventually extracted from the compound by IDF troops.

The five were among a larger group of about 30 people who entered the site without first obtaining security clearance, police said. Palestinian Police then came to the kever and started a confrontation with the Jews that quickly turned violent.

Palestinians pulled them from their cars and then torched one of the vehicles, reports said.

Police said the five Jews suffered bruises all over their bodies, and were treated at the scene by army paramedics. They were set to be transferred to a hospital for thorough examinations and then brought to court to be remanded. They are suspected of violating security regulations by going to the site without prior coordination.

The incident occurred only two days after a large group of Palestinians set fire to Kever Yosef.

Israel police said that the group, students at a yeshiva in Yerushalayim, claimed that they had entered the site in order to paint it after the fire there overnight Thursday.

The detainees told police that after they arrived at the kever, Palestinian Authority Police officers confronted them and cocked their guns at them. The police officers also attacked them with clubs and sticks and hit them with the butts of their guns, they said.

Most of the group succeeded in escaping, but five were caught – three minors and two adults — and transferred to the IDF.

The Jews were Breslover Chassidim.

“Israelis entering Area A are endangering their lives. We warned the public several times and do so again: There is a complete prohibition on entering the territory. The yeshiva students’ entrance to the site tonight was irresponsible and the incident could have ended in tragedy, especially in days as tense as these,” a police statement read, referring to a recent spate of attacks against Israelis and clashes in Israel and the West Bank.

The attorney and far-right activist Itamar Ben Gvir, who is representing the detainees, said it was “inconceivable that after the trauma they endured, the police is still holding them when they need treatment.”