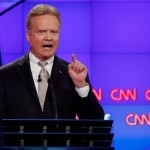 Jim Webb announced Tuesday that he will drop out of the Democratic presidential primaries, one day after emailing reporters that he was considering running as an independent.

During a press conference, Webb said he would run independently because, he realized, many of his views are not compatible with the voting hierarchy of the Democratic Party and, furthermore, “Americans are neither Republican or Democrat.”

He concluded: “I will never change [my] views in order to adopt to a party platform.” Read more at Fox News.