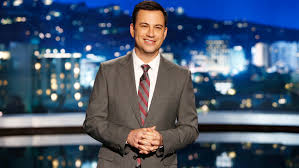 A week after Jimmy Kimmel shared the news about his newborn son’s heart defect – and made an emotional plea about preexisting conditions amid the health-care debate – he returned to his late-night show on Monday to huge applause from his studio audience.

“I made an emotional speech that was seen by millions. And as a result of my powerful words on that night, Republicans in Congress had second thoughts about repeal and replace. . .I saved health insurance in the United States of America,” Kimmel said triumphantly. He paused, then was “shocked” to discover the controversial bill passed in the House. “What’s that? I didn’t? I didn’t save it? They voted against it anyway?! I really need to pay more attention to the news.”

Anyway, Kimmel said, his son Billy is doing well. Kimmel also thanked viewers for their support. Then he noted that some people were very critical of his health-care comments. As you might expect, he did not hold back.

“I know this is gonna shock you – there were also some not-so-nice things that people said online about me, including members of the media,” said Kimmel, showing headlines from the New York Post (“Jimmy Kimmel’s obscene lies about kids and medical care”) and the Washington Times (“Shut up Jimmy Kimmel, you elitist creep.”)

Kimmel said he was proud of that label, because when he was growing up drinking powdered milk when his family couldn’t afford the liquid, his dream was to become an out-of-touch Hollywood elitist. “I guess it came true!” he exclaimed.

He continued the sarcasm. “I would like to apologize for saying that children in America should have health-care. It was insensitive,” Kimmel deadpanned. “It was offensive and I hope you can find it in your heart to forgive me.”

He saved most of his ire for Newt Gingrich, the former speaker of the House. “There are some very sick and sad people out there. Here’s one of them, his name is Newt Gingrich,” Kimmel said. He ran a clip of Gingrich on “Fox News Sunday” criticizing Kimmel’s comments and saying that when a newborn has a heart problem, doctors will help immediately, and not wait until the family cuts a check.

“Yes, it is true that if you have an emergency, they will do an operation. And that’s terrific if your baby’s health problems are all solved during that one visit. The only problem is that never, ever happens,” Kimmel shot back. “We’ve had a dozen doctors appointments since our son had surgery. You’ve got a cardiologist, the pediatrician, surgeon, some kids need an ambulance to transport them. That doesn’t even count the parents who have to miss work for all this stuff. Those details, Newt forgot to mention. I don’t know if the double layers of Spanx are restricting the blood flow to his brain.”

Kimmel wasn’t finished. “And not only is Newt Gingrich an expert on sick children, turns out he also knows a thing or two about the late-night comedy business,” he smirked. He rolled a clip of Gingrich saying, “The problem you have with humor in America today is that Hollywood is so enraged at Donald Trump that they can’t be funny,” adding that late-night comedians are consumed with anger.

Kimmel then segued into an interview with Sen. Bill Cassidy, R-La., who was asked in a TV interview last week whether insurance companies should be able to cap payouts. “I ask, does it pass the Jimmy Kimmel test? Would a child born with congenital heart disease be able to get everything he or she would need in that first year of life?” Cassidy said at the time.

Cassidy appeared on Monday’s show via satellite; the two went back and forth for several minutes. “Why are the vast majority of Republican politicians against making sure Americans are truly covered when it comes to health-care?” Kimmel asked. Cassidy responded that President Donald Trump said he wants all Americans to be covered; take care of preexisting conditions without mandates; and lower premiums, because middle-class families can’t afford them.

Later, Cassidy added that the bill passed by the House last week actually raises premiums: “Which is why, on the Senate side, we need to make it work.” He urged viewers to call their senators and tell Democrats “don’t just sit on the sidelines, engage” and tell Republicans “we’ve got to fulfill President Trump’s contract, lowering premiums with coverage that passes the Jimmy Kimmel test.”

“If we do that, we get an American plan. . .that’s where we need to be,” Cassidy said as the audience applauded.

Kimmel offered a suggestion for his namesake test. “The Jimmy Kimmel test, I think should be, no family should be denied medical care, emergency or otherwise, because they can’t afford it,” he said, as the audience cheered again. “Can that be the Jimmy Kimmel test? As simple as that? Is that oversimplifying it?”

“You’re on the right track,” Cassidy assured him. “And if that’s as close as we get, that works great in government. Now we gotta be able to pay for it, and that’s the challenge, so all those middle class families right now. . .we have to make it affordable for them, too.”

“I can think of a way to pay for it is don’t give a huge tax cut to millionaires like me and instead, leave it how it is. I mean, that would be one way,” Kimmel offered. “That’s my vote.”