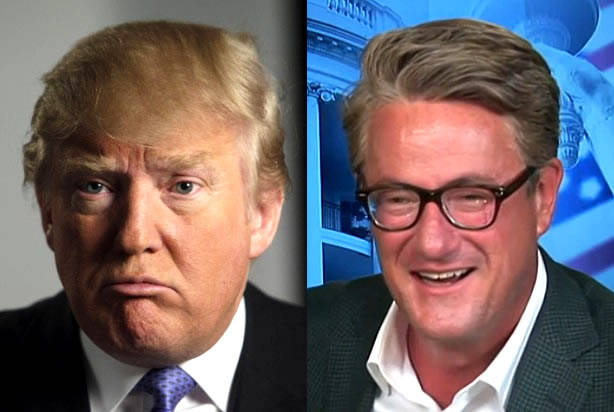 After months of amiable interviews and a report that their “friendship” was making NBC executives uncomfortable, the host and the presidential candidate have recently been bickering on Twitter. And now the feud has ratcheted up another level, with Scarborough on Monday ripping Trump’s “racist statement” that a federal judge of Mexican descent is inherently biased against him.

Scarborough, a former Republican congressman from Florida, has criticized Trump before. He has said he could never vote for the presumptive GOP nominee, so long as Trump refuses to back off his proposal to temporarily ban all foreign Muslims from entering the United States. He also has called Trump’s delayed disavowal of support from white supremacists “disqualifying.”

But Scarborough has rarely appeared as fired up as he was on Monday, as he lit in to Trump for the ethnicity-specific attack on U.S. District Judge Gonzalo Curiel, who is presiding over a case involving Trump University. And the “Morning Joe” co-host saved some fire for Republican leaders who likewise condemned Trump’s remarks about Curiel but have nevertheless endorsed him.

“These Republicans this week who were so shocked and stunned and deeply saddened and offended by this clear act of racism had all the evidence in the world before that he had done things that – again – stopped them from endorsing him,” Scarborough said. “How do you endorse, Paul Ryan, a man that supports the banning of 1.4 billion Muslims from ever entering the United States of America? You make him back down, actually.”

Scarborough went on to suggest that he had tried to reason with Trump all this time to give him the benefit of the doubt in hopes that he would eventually see the light.

“That’s what I was hoping, that perhaps we could put pressure on him to back down and change that policy,” he said. “Instead, Al, he’s doubled down. And now it’s people that may have – what is it, one-16th Mexican blood? If you’ve got one-16th Mexican blood that maybe you can’t be a judge. One-16th Muslim blood? I mean, this is unbelievable. He is getting worse, not better.”

The “Al” addressed by Scarborough was MSNBC’s Al Sharpton, a panelist on Monday’s program. Scarborough went on to argue that by endorsing Trump for president, House Speaker Paul Ryan, R-Wis., has effectively endorsed the inflammatory things the candidate says, too. You can’t explicitly do one without implicitly doing the other, he contended.

The last time Scarborough said something Trump didn’t like (about the prospect of an independent candidate), the real estate mogul vowed to boycott “Morning Joe,” but he was back on the show two weeks later.

Last Friday, however, Trump renewed his boycott, ostensibly because of something Scarborough’s co-host, Mika Brzezinksi, said that day.