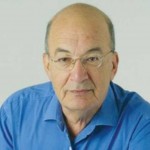 Veteran Israeli politician and journalist Yossi Sarid died Friday at the age of 75.

Sarid was a member of the nine Knessets between 1974 and 2006, serving as a lawmaker for the (Labor) Alignment, Ratz and Meretz parties.

He held two portfolios — education and environment — and led the Meretz party from 1996 to 2003, serving as head of the opposition for the latter two years of his party leadership.

Born in Rechovot in October 1940, Sarid was the son of Ya’akov Sarid, a director-general of the Education Ministry. His mother was a teacher.

After his national service, during which he was a military correspondent and a member of the artillery corps, Sarid began his career as an aide to late prime minister Levi Eshkol. He entered the Knesset in 1973, as a member of the Alignment, the forerunner of the Labor party. He remained in parliament for 43 years, retiring in 2006 when he began a weekly column in the liberal newspaper Haaretz.

Upon his retirement, Sarid returned to writing, penning his political column in Haaretz.

His last column was published by Haaretz on Friday, just hours before he died.

Channel 2 television said that an ambulance was summoned to his home on Friday evening after he lost consciousness; he was pronounced dead after an hour of efforts to revive him. Army Radio reported that he had suffered a heart attack.

Sarid is survived by his wife, Dorit, and their three children.