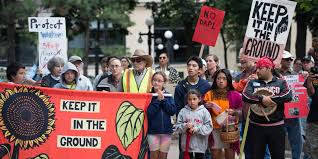 A federal judge in Washington, D.C., refused to issue a preliminary injunction Tuesday to stop construction of the Dakota Access pipeline, making it increasingly likely that the nearly complete pipeline will be cleared to start carrying crude oil.

The Standing Rock and Cheyenne River Sioux tribes had challenged the pipeline on the grounds that running it under Lake Oahe in North Dakota would violate their religious freedom because of beliefs linked to the lake’s waters.

District Court Judge James Boasberg said that the challenge was unlikely to succeed and that a preliminary injunction on that basis would cause an unreasonable delay in the project.

But Boasberg will continue to weigh the tribes’ other challenges, including the obligations of the Army Corps of Engineers to the Native American tribes under the Fort Laramie Treaties signed in the mid-19th century.

“The ruling is disappointing but not surprising – it is very difficult to get an injunction under these circumstances,” Jan Hasselman, a lawyer for the tribes, said in an email. “However, the Court has yet to hear our primary legal case that the Trump-issued permits were illegal. We think we have a strong case and look forward to our day in Court.”

The Fort Laramie Treaties ceded a larger area of land to the tribes than those included in the modern reservations created later by Congress. And the tribes have asserted that the Army Corps has obligations to protect the tribes’ rights to hunt, fish or gather on those lands and to guarantee protection from oil spills in the vitally important Missouri River and Lake Oahe.

“Once again, the federal government and the army are treating the original inhabitants of this land as though we are less than human, as though our lives and lands are something to be ignored and discarded in the never-ending quest for profit,” Chase Iron Eyes, the lead counsel of the Lakota People’s Law Project.

The Dakota Access pipeline is a 1,170-mile-long, multibillion-dollar project that would carry crude oil from North Dakota to Illinois. The pipeline is virtually completed except for the last segment running under Lake Oahe. Construction has continued while Boasberg deliberated, and the company has said that oil could flow in as soon as a couple of weeks.

Iron Eyes said that Sunoco, a partial owner of the pipeline, would be the operator and he said that the company has a dismal track record for leaks over the past decade, “despoiling Grandmother Earth.”

The tribes have fought against the easement the company used for the final segment. The easement was blocked by President Barack Obama, who asked the Army Corps of Engineers to look for alternatives and to do an environmental-impact statement. But President Trump ordered the Army Corps to expedite the pipeline permits, and the Corps complied by saying it no longer needed to reexamine the environmental impact.