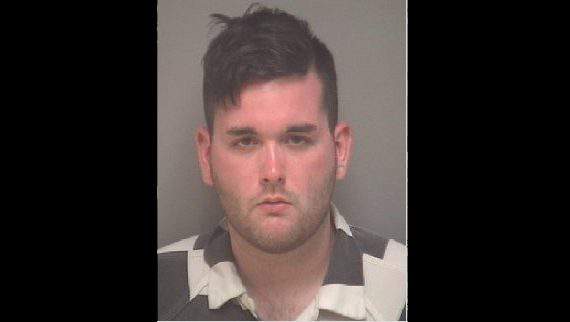 An Ohio man accused of plowing a car into a crowd of activists in Charlottesville, Virginia, on Saturday, killing one person and injuring 19, was denied bail Monday in his first court appearance.

James Alex Fields Jr., 20, appeared via a video link from Albemarle-Charlottesville Regional Jail and was held on multiple felonies in the incident that occurred during a white nationalist rally that saw clashes between protestors and counterprotestors.

Prosecutors did not detail the evidence against the Maumee, Ohio, man who came to Virginia to attend the rally, according to his mother who spoke over the weekend.

A few hours after the court hearing, President Donald Trump responded to criticism over his initial response to the violence by singling out the KKK, neo-Nazis and other white supremacists as “criminals and thugs . . . that are repugnant to all that we hold dear as a nation.”

Trump also reiterated that the Justice Department has launched a civil rights probe into the deadly clashes.

Earlier on Monday, Attorney General Jeff Sessions said in television appearances that the violence in Charlottesville met the definition of domestic terrorism.

Fields replied “no sir,”when asked in court whether he has any ties to the Charlottesville community.

A former teacher of Fields has said that Fields espoused extremist ideals at least since high school. Derek Weimer, a history teacher, said in a weekend interview that he taught Fields in his junior and senior high school years in Kentucky.

Heather Heyer, 32, of Charlottesville, was killed Saturday when police said Fields barreled toward her and other counterprotesters in his 2017 Dodge Challenger as he drove “at a high rate of speed” rear-ended another car and pushed vehicles into a crowd of pedestrians. Police charge that Fields then backed up and fled.

In a separate incident, two Virginia state troopers monitoring the protest were killed when their helicopter crashed in woods not far from Charlottesville.

In a written statement, Charlottesville’s Commonwealth Attorney Dave Chapman said the community “is deeply saddened by the loss of Ms. Heyer and by the injuries that were sustained by many people who, like her, were doing no more than peacefully expressing their strongly held beliefs.”

Chapman said final decisions on charges against Fields would be made after the Charlottesville Police Department completes its ongoing investigation.

At his appearance before Judge Robert H. Downer Jr. in Charlottesville General District Court, Fields said he could not afford an attorney and was appointed one by the court.

He said he has worked for about two years as a security guard in Ohio, earning $10.50-an -hour and taking home about $650 every two weeks, according to income information filed with the court.

The weekend rally drew international attention to the city that is home to Virginia’s flagship University of Virginia.

But in a signal of how small a community Charlottesville is, the judge informed Fields that he could not be defended by the Charlottesville Public Defender’s Office because a relative of someone who works for the office had been involved in Saturday’s incident, without specifying if that meant the protests or the crash.

“I’m going to make a decision that you could not have a bond until you see your attorney,” the judge said in appointing Charles Weber to represent Fields.

He set 11 a.m. Aug. 25 as the next court date to consider scheduling of a preliminary hearing.

The judge asked Fields if understood everything that had taken place, and he responded “yes, sir.”

The city’s decision this year to change the name of Lee Park to Emancipation Park and to order the removal of the Robert E. Lee statue from the park has made it a lightning rod for white nationalists and extremists who see it as an attempt to erase white history.

Weber, Fields’s court-appointed attorney, is one of a dozen plaintiffs in a lawsuit seeking to stop the removal of the Lee statue.

The lawsuit, filed on March 20, describes Weber as Vietnam fighter pilot with “a special interest in the protection and preservation of war memorials and monuments located in the City, including those of Generals Lee and Jackson.”

Those who wish to defend the statues had “no recourse but to proceed in a court of law,” he told The Washington Post when the suit was filed.