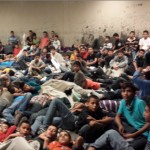 A federal judge ordered the U.S. government on Friday to release detained immigrant children, ruling that the children are being held in violation of of a 1997 class-action settlement. U.S. District Judge Dolly Gee ordered the government to comply with her order by Oct. 23. The 1997 settlement said that said people under the age of 18 cannot be held for more than 72 hours.

More than 1,400 parents and children are being held at three centers, which Gee said had “deplorable” conditions. In some cases, those conditions include children being held in crowded rooms for days at a time without any place to sleep. Read more at the Los Angeles Times.