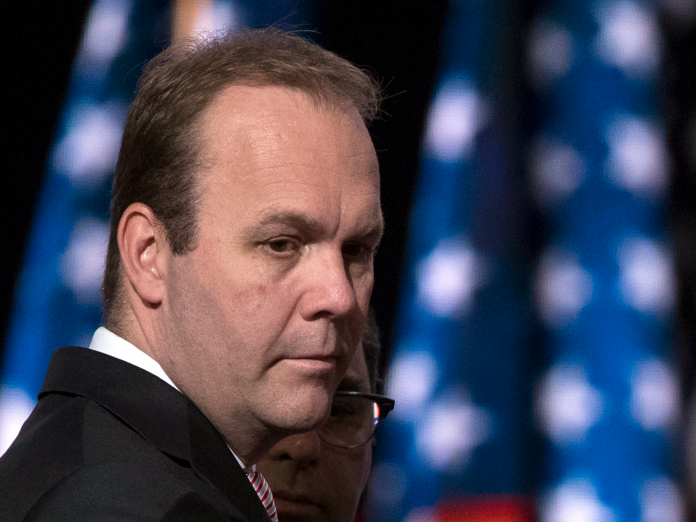 Gates’s attorney two days ago requested his client be permitted to serve the rest of his sentence under home confinement, without making public how many days Gates had already served. Gates was sentenced in December after cooperating in former special counsel Robert Mueller’s investigation of Russian interference in the 2016 U.S. election.

U.S. prosecutors did not oppose his request.

In a brief court order Tuesday afternoon, U.S. District Judge Amy Berman Jackson of Washington agreed only that the 45 days he was sentenced to serve over three years, including potentially over weekends, be “suspended indefinitely, pending further order of the Court.”

Jackson also ordered that probation officials report Gates’s compliance to date by May 5, including how many weekend days he has spent in confinement and the number of hours of community service he has performed.

Gates, 47, had argued that the health threat posed by the pandemic and related government restrictions marked a change in circumstance for the father of four from Richmond, Virginia, whose wife has cancer.

“The massive societal disruptions caused by this pandemic are tragic, and the burdens they have placed on Mr. Gates and his family warrant a modification of the condition on his probation,” Gates attorney Thomas Green wrote in a four-page filing. “Mr. Gates must now provide additional care for his family for the foreseeable future while his wife continues her treatment for and recovery from cancer.”

Gates is listed by the Federal Bureau of Prisons online inmate locator as being under the control of the agency’s residential reentry management field office in Baltimore.

Gates pleaded guilty in February 2018 to lying to the FBI and conspiring to conceal tens of millions of dollars that he and Trump 2016 campaign chairman Paul Manafort earned in undisclosed lobbying for a pro-Russian politician in Ukraine. He remained Manafort’s right-hand man when Manafort served as campaign chairman until that August. Gates was a key government cooperator and gave Mueller’s office “ample basis” to investigate coordination between the campaign and Russia or possible obstruction of justice, Jackson said.

She cited in particular his revelation that Manafort in July 2016 shared internal Trump campaign polling data and discussed advancing of a Ukrainian peace plan backed by Russia with an aide the FBI assessed to have Russian intelligence connections. Manafort lied about those interactions, leading to the collapse of his plea agreement with the special counsel.

Gates remained with the Trump campaign after the election, worked for the Republican National Committee and was deputy chairman of the Trump inaugural committee.

Separately, Manafort, 71, is awaiting a response to his April 13 request to the Federal Bureau of Prisons for release to home confinement to serve the rest of his 7 ½-year sentence. His lawyers said his age and health put him at “high risk” of contracting the coronavirus.

Manafort is serving a term due to end in November 2024, at the Loretto federal prison in central Pennsylvania, a low-security facility with an adjacent minimum-security camp.

Manafort was convicted in 2018 of bank and tax fraud, witness tampering and conspiring to defraud the United States.

Manafort has high blood pressure and liver disease, his lawyers said. He also contracted influenza and bronchitis in February, and in December he was hospitalized for several days for a heart condition, his lawyers said.

They asked that he be released to live with his wife at their condominium in Northern Virginia “to serve the remainder of his sentence or, alternatively, for the duration of the ongoing COVID-19 pandemic.”