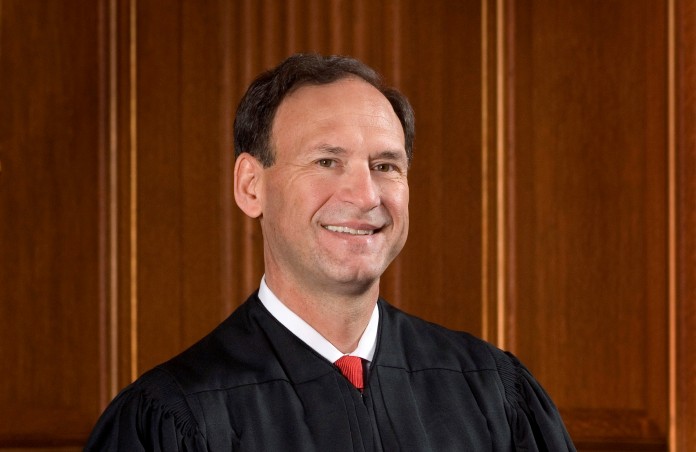 On Monday, the Supreme Court declined to hear Ben-Levi v. Brown, but Justice Samuel Alito dissented, arguing that North Carolina prisons had discriminated against the Jewish plaintiff prison inmate, in violation of the Free Exercise Clause.

Ben-Levi is serving a life sentence for a 1980 incident. At some point, he changed his name to Israel Ben-Levi, and either converted to Judaism or rediscovered Judaism; he now wants to engage in group Torah study with two other inmates. North Carolina prisons generally allow group religious study, but for Jews they require either the presence of a rabbi or a minyan — 10 adult Jews. The minyan requirement stems from the prison system’s understanding of Jewish law.

This, Justice Alito argues, is impermissible religious discrimination against Jews, which violates the Free Exercise Clause:

In essence, [the warden]’s argument — which was accepted by the courts below — is that Ben-Levi’s religious exercise was not burdened because he misunderstands his own religion. If Ben-Levi truly understood Judaism, [the warden] implies, he would recognize that his proposed study group was not consistent with Jewish practice and that [the warden]’s refusal to authorize the group “was in line with the tenets of that faith.”

The argument that a plaintiff’s own interpretation of his or her religion must yield to the government’s interpretation is foreclosed by our precedents. This Court has consistently refused to “question the centrality of particular beliefs or practices to a faith, or the validity of particular litigants.” “Repeatedly and in many different contexts, we have warned that courts must not presume to determine the place of a particular belief in a religion or the plausibility of a religious claim.”

Just last Term, we emphasized that the government cannot define the scope of personal religious beliefs. In Holt v. Hobbs, we held that a prison policy preventing a Sunni Muslim inmate from growing a 1/2-inch beard substantially burdened his religious exercise. In so holding, we explicitly rejected the argument that there was no burden because “not all Muslims believe that men must grow beards,” reaffirming that “the guarantee of the Free Exercise Clause . . . is ‘not limited to beliefs which are shared by all of the members of a religious sect.’”

As this discussion makes clear, [the warden]’s focus on the correctness of Ben-Levi’s understanding of Judaism is inconsistent with our case law. Even assuming that [the warden] accurately identified the requirements for a group Torah study under Jewish doctrine — and that is not at all clear — federal courts have no warrant to evaluate “the validity of [Ben-Levi’s] interpretations.” Instead, the courts below should have considered whether the [prison system] policy imposed a substantial burden on Ben-Levi’s ability to exercise his religious beliefs, as he understands them. Ben-Levi believes that relaxing the minyan requirement promotes his faith more than sacrificing group Torah study altogether. By ignoring Ben-Levi’s actual beliefs and focusing solely on [the prison system]’s understanding of Judaism, [the warden] and the courts below considered the wrong question.

[Footnote moved: [The warden] notes that “in one of the few documents filed by Petitioner in this case, the author states that ’[i]t is best to pray in a synagogue with a Minyan (a congregation of at least ten adult men).’” Even assuming that Ben-Levi agrees with that statement, [the warden] is not permitted to dictate the appropriate religious response to Ben-Levi’s inability to muster a minyan. The prisoner in Holt believed that ‘his faith requires him not to trim his beard at all,‘ but he preferred a 1/2-inch beard to no beard. Likewise, Ben-Levi believes that a study group with fewer than 10 Jewish participants is preferable to no study group at all. [The warden] has no business questioning the validity of this belief.] …

Nor can I conclude that Ben-Levi’s ability to engage in “private worship” shows that his religious exercise was not burdened. If the opportunity to pray and study privately were sufficient to satisfy the First Amendment, then prisons could justify any restriction on religious exercise short of depriving an inmate of his religious texts.

Many prisoners, Ben-Levi included, consider it important to congregate with other practitioners of their faith for prayer and discussion. Preventing them from doing so burdens their religious exercise, even if they are allowed to study and pray alone in a cell. Ben-Levi has presented ample evidence that group study, even absent a minyan, is important to his faith. The courts below thus erred in holding that his religious exercise was not substantially burdened as a matter of law….

[The warden] contends that several government interests justify [the prison system]’s policy, including (1) maintaining order, security, and safety; (2) balancing inmate relationships; and (3) conserving personnel resources…. The problem with these asserted justifications is that they seem to apply equally to inmates of other religions, who were nevertheless allowed to meet in groups of fewer than 10 without an outside leader. For instance, [the warden] has given no reason to believe that Jewish prisoners are more inclined than prisoners of other religions to “us[e] faith practice to mask their gang activity.” Nor is there any indication that a Jewish study group is more likely than a Christian or Muslim group to impede order, compromise inmate relationships, or absorb personnel resources. The State has no apparent reason for discriminating against Jewish inmates in this way….

Needless to say, the Court’s refusal to grant review in this case does not signify approval of the decision below. But the Court’s indifference to this discriminatory infringement of religious liberty is disappointing.

Alito’s legal analysis seems quite correct. Alito is also clearly correct in noting that the court’s refusal to grant review isn’t a judgment on the merits, and it’s also not a precedent: The court gets 8,000 petitions per year and agrees to hear about 80 of them — it often declines to review cases because it doesn’t think the decisions (right or wrong) merit the justices’ time, or because there are procedural problems with the case.

Finally, note that Alito didn’t discuss whether the prison system’s actions violated the Religious Land Use and Institutionalized Persons Act, which requires exemptions even from some neutral, nondiscriminatory prison policies — here, Alito concluded, the policy was discriminatory, and thus violated the Free Exercise Clause itself.