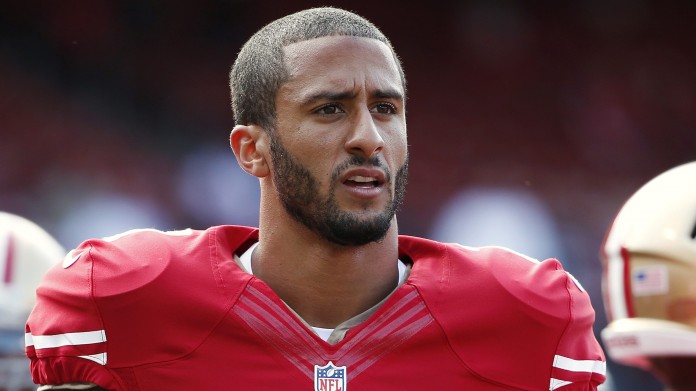 Colin Kaepernick’s high-profile protests appear to have reinvigorated the market for his jersey.

On Sunday, the backup quarterback’s No. 7 jersey was the best seller among current 49ers players in the team’s online store, jumping from the No. 6 spot, according to Marketwatch. Leaguewide, the jersey is now the third most popular in the NFL’s online store, jumping 17 places from where it ranked just over a week ago, ESPN reported. Only Dallas Cowboys running back Ezekiel Elliott and New York Giants wide receiver Odell Beckham Jr.’s jerseys outsold Kaepernick’s.

Kaepernick, an active supporter of the #BlackLivesMatter movement, became a household name even among non-football fans late last month when he was spotted sitting while the national anthem played ahead of a preseason game against the Green Bay Packers.

“I am not going to stand up to show pride in a flag for a country that oppresses black people and people of color,” Kaepernick said when asked about it after the game. “There are bodies in the street and people getting paid leave and getting away with murder.”

“We need a more substantive conversation around race relations and the way people of color are treated,” she said after the game.

Even President Obama has gotten involved. On Monday, he told journalists while traveling in China that Kaepernick is “exercising his constitutional right” to sit during the national anthem, while conceding that the protest could be a “tough thing” for military service members to accept.

Kaepernick’s actions have offended some military members, but certainly not all. Enough veterans have expressed their support for the quarterback that the hashtag #VeteransforKaepernick trended worldwide on social media late last month.

Kaepernick, meanwhile, has promised to donate $1 million of his earnings to charities that support racial equality.

“I’ve been very blessed to be in this position and make the kind of money I do,” the player, who will make a base salary of $11.9 million this season with the 49ers, said last week. “I have to help these people.