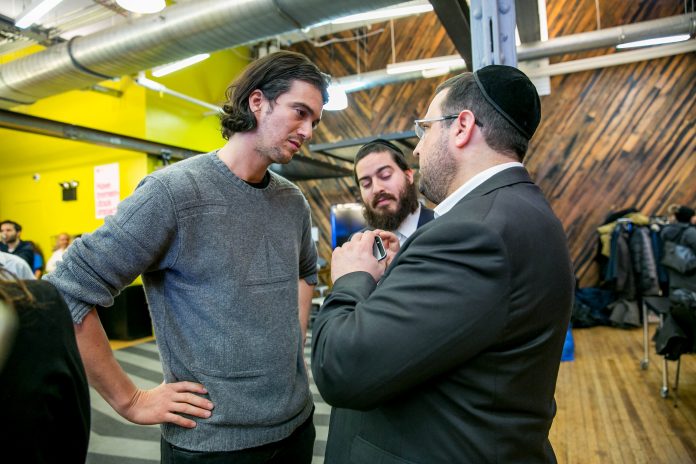 In an unprecedented show of support for Israel’s fledgling Haredi start-up ecosystem, over 300 potential investors, as well as some of the biggest names in the hi-tech world and New York Jewish community, came to the ADP Innovation Center in Manhattan last week to eyeball exclusive demonstrations from 8 nascent start-ups (aka ‘Demo Day’), who are part of the Kamatech Accelerator program in BneiBrak.

This initiative has received unrivaled support from start-up moguls, ranging from AmnonShashua, the co-founder & CTO of Mobileye and Adam Neumann of WeWork, to Malcolm Hoenlein, Executive Vice-Chairman of the Conference of Presidents of Major American Jewish Organizations and the UJA-Federation of New York.

“We are extremely proud and excited about our start-ups because these talented young people represent the future of the Haredi community and Israel’s renowned start-up nation innovation on a global scale,” boasted Friedman,

Hoenlein added, “I just returned from China and after meeting with so many Chinese businessmen who expressed a very strong interest in Israel’s start-up community, Moshe Friedman and Kamatech have opened up a reservoir of opportunity. Everyone wants to be a partner with Israeli hi-tech and this is a great opportunity to build bridges.”

Adam Neumann, the Israeli-born CEO of the multi-billion dollarWeWork shared workspace empire lionized the Kamatechinitiative.”To take the great brains of youngsters learning in yeshiva and teaching them how to convert their passion and energy for the hi-tech world is a great cause that I want to be a part of,” he said.

During the course of the evening, each start-up CEO was given 3 minutes to showcase his/her start-up concept to investors. The concepts ranged the gamut of technological innovation including: the creation of an AI (Artificial Intelligence) language, Brillianetor,which enables machines to “speak” with each other; a platform for smart urban life management dubbed Doorbill; a ground-breaking musical program called Muze that allowed the late Shimon Peres to play Beethoven’s 9th symphony within minutes; and a cutting-edge APP called Emerj that will entitle corporations to stem the tide of employees from moving to other companies by engaging them in a more personal manner.

According to Friedman, several of the aforementioned start-ups are already attracting considerable attention from Fortune 500 companies, who on the verge of signing major contracts with them in the coming weeks.

A serial Haredi investor from Williamsburgh, Brooklyn remarked, “Honestly, I thought at least two of the start-ups had billion dollar potential, which surprised me. This was a very interesting and sharp group of innovators.”