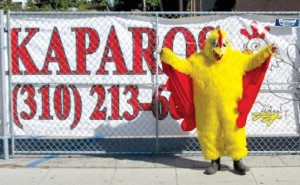 Jewish Journal reports: We refuse to be your Kapores!” a chicken shouts. “We demand our rights,” a rooster chimes in.
Both are characters speaking from the pages of a children’s book, “When the Chickens Went on Strike,” an adaptation by Erica Silverman of a Sholem Aleichem story about a confrontation in a Russian village over a Jewish custom that takes place in many observant Orthodox communities worldwide.

In Los Angeles, the demands to cease the custom of kapparot are not coming from barnyard foul. Animal activists here have taken on the cause, including filing a recent suit in Los Angeles County Superior Court.

“The unlawful competition law provides that if a defendant is involved in business practices that are illegal, then a plaintiff who has lost money or property as a result of the business practice has a standing to bring a lawsuit and seek an injunction to end that business practice,” said David Simon, lead attorney for the plaintiffs.

The losses plaintiffs named in the statements accompanying the complaint include various amounts for expenses for travel to kapparot protests, time lost from work as a result of attending them and the printing of leaflets. One statement by Lewis included $472.94 in veterinarian bills for two chickens she rescued from Ohel Moshe, a Pico Boulevard synagogue named in the suit.

Until last year, the practice had become very public, especially along Pico Boulevard in the Pico-Robertson neighborhood, with booths for kapparot set up in parking lots and in public alleyways, promoted with large banners and even barkers in chicken costumes.

“In the various stages of the kapparot process,” including transporting the chickens, storing them on the property, slaughtering them and later hosing their blood and fecal matter into city gutters and storm drains, the suit alleges that those named “violate on average 11 laws, and in some cases as many as 14 laws,” Simon said.

“We would like the practice to halt, because we don’t think it’s possible for it to be done in a way that complies with the various legal requirements,” said Simon, an Irvine-based attorney who does pro bono work in animal cruelty cases, mostly involving suing venues that deny activists access for purposes of free speech.

The complaint includes statements from 10 witnesses to the activities at various named kapparot sites, including one witness who is identified as a toxicology expert, “who says that these practices create a significant public health risk,” Simon said.

The fight against using chickens for kapparot is taking place nationally. Karen Davis, president of United Poultry Concerns, is an animal rights activist living in Virginia and is involved with a suit against kapparot practices in New York.

Among the other plaintiffs is Mahgerefteh, a Los Angeles resident who, as early as 2007, put on a chicken suit to call attention to the plight of the chickens used in kapparot; Gage, a professional photographer; Hoyt, who operates an online dating service; Mack, a math teacher;

Schramm, a data analyst at UCLA; and Lewis, who has been fighting against kapparot since 2013.

Simon went to L.A. Superior Court on Sept. 2 to request a temporary restraining order, just weeks before the time when Jews practice kapparot. “Unfortunately, he denied our request,” Simon said of Judge James C. Chalfant. The judge dismissed the plaintiffs, saying, “We had known about this for years and came in two weeks before it started and asked for an emergency order, and there would have been no emergency if we had filed our papers sooner,” Simon said.
Although Simon had, as required, informed the defendants prior to the hearing, “Nobody showed up to formally oppose the motion,” he said. “They have never responded to any of my communications.”