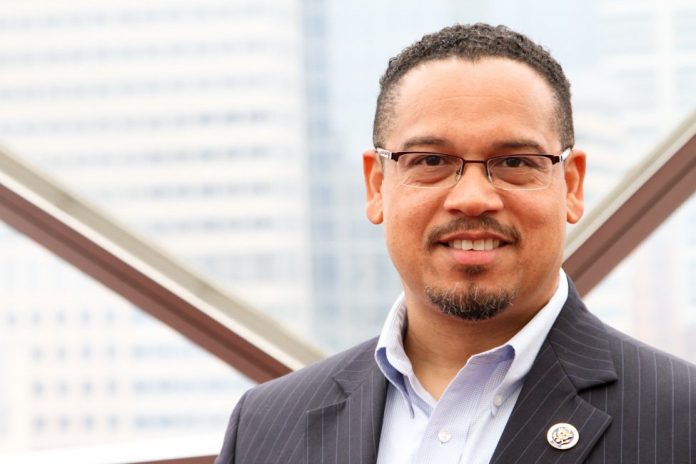 Rep. Keith Ellison, D-Minn., is now engaged in a very public battle for an internal Democratic job – a battle that risks undermining the reason some Democrats want him to lead the party in the first place.

Ellison really wants to be the Democratic National Committee’s next chairman, and he’s got the support of powerful liberals like Sen. Bernie Sanders, I-Vt., for the job. He’s a progressive black man from the Midwest who, a decade ago, became our nation’s first Muslim member of Congress. Today, he would present a striking contrast to President-elect Donald Trump.

But Ellison is also a lightning rod, thanks to a wide range of comments he has made over the decades – comparing George W. Bush’s rise to Adolf Hitler’s, defending the controversial leader of the Nation of Islam from accusations of anti-Semitism and suggesting the U.S. create a black state.

Ellison has apologized for or backed off almost all of it. But the fact that those comments exist has put him in an unusual position for someone angling for an internal party job: He is having to publicly campaign for it against some influential outside groups who now don’t want him to get it.

The Anti-Defamation League had previously offered its tepid support for Ellison, but on Thursday it came close to revoking it. It wasn’t for something Ellison said decades ago but rather a 2010 speech recently unearthed, where Ellison appears to question Israel’s influence over U.S. foreign policy.

“Rep. Ellison’s remarks are both deeply disturbing and disqualifying. His words imply that U.S. foreign policy is based on religiously or national origin-based special interests rather than simply on America’s best interests. Additionally, whether intentional or not, his words raise the specter of age-old stereotypes about Jewish control of our government, a poisonous myth that may persist in parts of the world where intolerance thrives, but that has no place in open societies like the U.S.”

Both statements come on the heels of journalists resurfacing his vocal defenses of Nation of Islam leader Louis Farrakhan and other radical black leaders. Farrakhan, who is widely considered to be anti-Semitic, “is not an anti-Semite,” Ellison declared in 1995.

Ellison’s desire to run the Democratic Party after one of its worst electoral performances in recent history has thrust him into the national spotlight. His past comments have thrust him into a position where he is publicly playing defense.

He launched a public website explaining why he’d be good for the job. On Thursday, he wrote an open letter to the ADL saying his comments were taken out of context (and making sure to mention in the first line that it had supported him in the past).

And on the matter of his association with the Nation of Islam, he wrote an op-ed for The Washington Post’s Acts of Faith blog Friday, declaring, “I should have listened more and talked less”: http://wapo.st/2gvm6um

“When I first heard criticism about Louis Farrakhan, the leader of the Million Man March, I felt the march’s message of empowering young African Americans was being attacked,” Ellison wrote. “But I clearly didn’t go deep enough. I defended the organizer of the march in writing, but I glossed over the hurtful and divisive language he directed at other communities.”

This has been a pattern for Ellison since he got into politics decades ago. Something he said or wrote gets dredged up, and he backs off it by saying he didn’t understand the magnitude of what he said at the time. It’s a pattern that is clearly repeating itself, even while he is a member of Congress.

Controversy is nothing new for heads of the Democratic Party (just ask Debbie Wasserman Schultz and Donna Brazile). But controversy before you even get the job is not a good start. It puts Ellison on the defensive in a very public way, and it arguably opens the door for conservative media to bash Democrats on the very thing Ellison’s candidacy is supposed to stand against: bias and bigotry.

Ellison’s struggles put Democrats more broadly in a tough position, too. Their ranks are once-in-a-generation thin right now. They’re divided on which way to take the party after getting smashed at all levels over the past eight years. Ellison, baggage aside, symbolizes one direction: Get more liberal – fast.

If Democrats don’t like that direction – or the man volunteering to take them there – they don’t have a ton of other options. (Howard Dean wants to lead the DNC, too.)

Is all this a dealbreaker for Ellison and his high-profile liberal backers? It’s too soon to tell. But this isn’t a great – or even good – start for him.