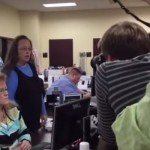 When Kim Davis came out to waiting couples Tuesday, she was asked “under whose authority” she was denying them licenses.

“Under God’s authority,” she said.

Attorneys have already filed a motion to find her guilty of contempt of court, after the high court ruled against the Rowan County Clerk in her appeal to refuse issuing same-gender marriage licenses based on her Christian convictions. Read more at the Courier-Journal.