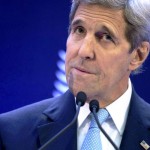 The growth of Jewish construction in Judea and Samaria has increased Palestinian frustration and has led to the recent spate of terror attacks, U.S. Secretary of State John Kerry said during a talk at Harvard University on Tuesday evening.

“What’s happening is that, unless we get going, a two-state solution could conceivably be stolen from everybody,” Kerry said. “And there’s been a massive increase in settlements over the course of the last years, and now you have this violence because there’s a frustration that is growing.”

Kerry added that he plans to travel to the region “soon” to help calm tensions, and that he held phone calls with Israeli Prime Minister Bibi Netanyahu and Palestinian Authority President Mahmoud Abbas last weekend.

Kerry’s remark on the cause of the violence represents a stark contrast with the comments of many Israeli leaders, who see the Palestinian terror attacks in recent weeks as a direct result of Palestinian incitement.

In a briefing to journalists, Israeli Infrastructure, Energy, and Water Minister Yuval Steinitz pointed to Palestinian propaganda videos and images glorifying the stabbings of Jews, and to a recent statement by Palestinian Authority President Mahmoud Abbas claiming that Jews are desecrating the Temple Mount with their “filthy feet” and blessing “every drop of blood spilled for Allah.”

“This is not new. It is just a new wave of terrorism and violence and this time it’s totally clear that the main approach here is a religious approach. Defending Islam from the enemy of the mosque, the enemy of Islam—against the Jews. It’s all about horrible, anti-Jewish, racist incitement,” Steinitz said, the Associated Press reported.

Israeli Ambassador to the United Nations Danny Danon echoed that sentiment on Wednesday in a statement to the U.N. secretary-general and Security Council, stressing that “only the cessation of the incitement will alleviate this dangerous situation and bring calm and security to the region.”

“Israelis do not feel safe walking down the street, they avoid taking the bus to work, and they fear for the lives of their children every time they walk out the door,” Danon said, the Jerusalem Post reported.

Leave a Reply to Nobody Special Cancel reply