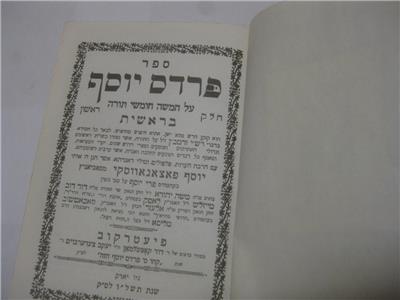 After an intensive search, the kever of Rav Yosef Patzanovski, author of the well-known Pardes Yosef commentary on the Torah, was discovered in the Lodz cemetery. The headstone also reveals the date of his petirah, the 2nd of Sivan.

“Recently, we have been searching for certain graves that were covered by growth and branches, and with wonderful hashgocha pratis, the kever of the Pardes Yosef has been found,” said Boris Veiniger of the local kehillah. “It was completely covered with dirt and thorns.”

Descended from the Nesivos Hamishpat, Rav Yosef, a prominent Gerrer chossid, was born in Poland and lived in Pavinitz, where he traded in lumber but spent most his time learning and writing seforim.He passed away in the Lodz ghetto four days after the passing of his wife, leaving his Torah commentary incomplete.

Initial restoration of the kever has begun with plans to fully refurbish the site and build an ohel.