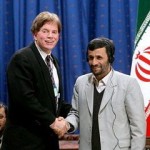 David Duke, the former Ku Klux Klan Grand Wizard and frequently unsuccessful U.S. political candidate, at the weekend congratulated Presbyterian Church USA on its vote to divest from companies that do business with Israel.

On his website, Duke said: “Bravo to the Presbyterian Church for standing up to Jewish racism and supremacism!”

“Through ethnic racism and tribalism they discriminate against Gentiles and take over media and other institutions,” he said. “Their racist power over the media and government is why Israel can get away with it all.”

“But people can stand up,” Duke said.

The post was flagged on Monday by Blogger Elder of Ziyon, who wrote of the endorsement, “PCUSA must be so proud!”

One commenter wrote on the Elder of Ziyon site: “This endorsement by Jew-hating David Duke is PRICELESS!”

PC (USA) leaders on Friday voted 310-303 to approve a motion at the church’s biennial general assembly in Detroit to divest from Caterpillar, Hewlett-Packard and Motorola because the companies do business with Israel.