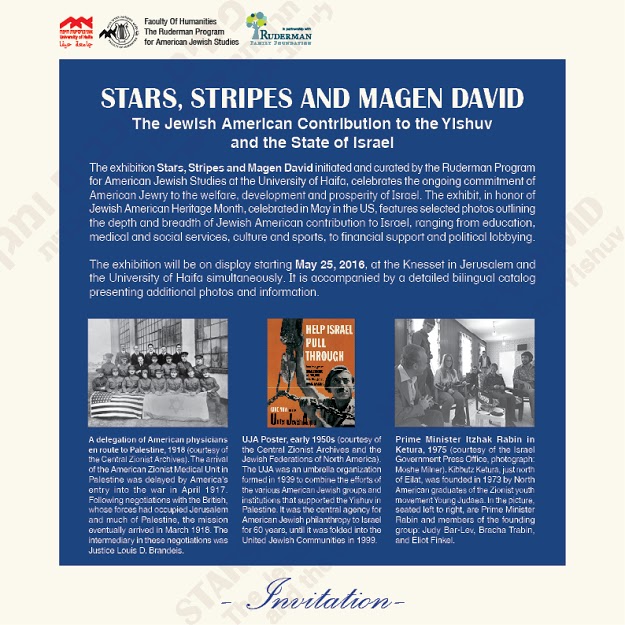 This Wednesday, May 25, the Ruderman Family Foundation will unveil a  photographic exhibition, “Stripes, Stars and Magen David” at a ceremony to recognize 100 years of American Jewry’s contribution to the Yishuv and the State of Israel at the Knesset.

The ceremony, the first of its kind, which was initiated by the Ruderman Family Foundation and put together by MK Dr. Nachman Shai and Speaker of the Knesset MK Yuli Edelstein, will mark the critical role American Jewry has made over the past 100 years in the establishment of the State of Israel. This landmark event will also see a number of distinguished guests give special remarks to honor the occasion including, Prime Minister Benjamin Netanyahu, Leader of the Opposition Isaac Herzog, Chairman of the Executive of the Jewish Agency for Israel Natan Sharansky, Ambassador of the United States of America to Israel Dan Shapiro and Chair of the Board of Trustees of the Jewish Federations of North America Richard V. Sandler.

The exhibition aims to educate Israelis of American Jewry’s deep involvement with the Yishuv and State of Israel, bringing to life the many years of unrelenting activity and support by American Jews through chronological illustrations in the fields of education, health, welfare, security and much more.

The exhibition will be on display at the Knesset for two weeks before traveling throughout the country and abroad.

“For the past 10 years, May has marked Jewish American Heritage month in the US and we thought it was time that Israeli society also acknowledged American Jewry and recognize the contribution the community has made to Israel throughout the years,” said Shira Ruderman, Director of the Ruderman Family Foundation. “The first step in Israel is knowledge. Most Israelis are not familiar with the fact that the American Jewish community has played such a significant role in the creation of the Zionist undertaking in building and developing the Jewish state.”