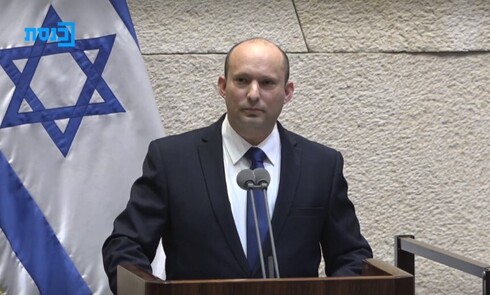 >>Follow Matzav On Whatsapp!<<
The Knesset convened today for a stormy session to swear in the coalition government of hard-right Naftali Bennett and centrist Yair Lapid, bringing an end to Bibi Netanyahu’s 12 consecutive years as prime minister.
The new government will also mark the end of a political crisis that sparked four elections in two years, including two rounds of voting during the coronavirus pandemic.

The new rotation government of 27 ministers was expected to win the support of 61 MKs — the slimmest of majorities in the 120-strong parliament— even as Netanyahu continued his efforts to foil its establishment until almost the last minute.
Netanyahu failed to form a government after the country’s March 23 election, a task that his political opponents managed with minutes to spare on June 2.
Bennett, a hawkish high-tech millionaire, will serve as prime minister for two years before Lapid, a former finance minister and journalist, takes over.
His speech to parliament was interrupted by shouting from members of the outgoing government, including ministers and MKs from Netanyahu’s Likud party, who accused Bennett of lying to his voters in order to take power.
Netanyahu loyalists, shouting “shame” and “liar”, frequently interrupted Bennett as he spelled out the new coalition’s policies.
Departing Knesset Speaker Yariv Levin, also of Likud, struggled to maintain order in the chamber and threatened to expel lawmakers from the session.
Bennett meanwhile praised his predecessor for his dedication to the country.
“Thank you, Prime Minister Netanyahu,” Bennett said, addressing his former mentor.
“I have seen you more than once in the small hours of the night, [bearing] the weight of responsibility. Benjamin and Sara, along the way we did not always agree but you both sacrificed a lot to serve our nation.”
Addressing the incessant heckling from right-wing MKs at him, Bennett said that “as loud as your screams are, so is your failure in governance.”
Speaking before the inauguration of his rainbow coalition government, Bennett said he was “proud to sit with those of a different opinion” and thanked Lapid — the politician who was the driving force in forming the country’s new government — saying “without him, we would have not got here.”
Echoing his predecessor’s policy on Iran, Bennett said that a renewal of the 2015 nuclear deal with Iran “would be a mistake that would again grant legitimization to one of the darkest and violent regimes in the world.”
Israel, he said, will not allow the Islamic Republic to obtain nuclear weapons.
Regarding the ceasefire in the Gaza Strip after last month’s 11-day conflict, Bennett warned that if Hamas again attacked Israel, it would be met with a strong response.
“I hope the ceasefire in the south will continue, but if Hamas will choose the way of violence against Israelis again, it will run into a wall of steel,” he said.
Bennett also thanked U.S. President Joe Biden for “years of commitment to Israel’s security”, and for “standing by Israel” during the May conflict.
He said his government would pursue good relations with U.S. Democrats and Republicans, while Netanyahu was criticized for clearly favoring the GOP and accused of destroying links to the Democratic Party.
“The government will make an effort to deepen and enhance our relations with both parties – bipartisan,” Bennett said. Read more at Ynet.
{Matzav.com Israel}