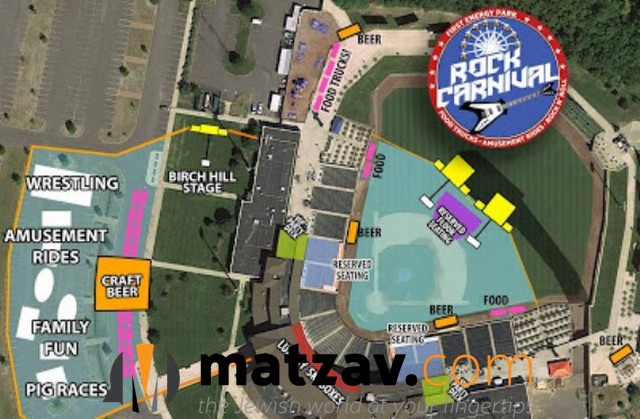 Officials in Lakewood, NJ, have reacted swiftly to complaints regarding excessive noise produced by a rock festival this weekend at First Energy Park (Blue Claws Stadium).

The three-day event began on Friday night and will conclude this evening.

After learning of residents’ concerns immediately after Shabbos, Mayor Menashe Miller held a conference with Committeemen Meir Lichtenstein and Isaac Akerman to discuss the issue. Committeemen Lichtenstein and Akerman actually went down to the stadium itself, mid-concert, to express their concerns and explore the matter.

Committeeman Lichtenstein related that when this event was first announced, local officials focused strongly on the security and traffic issues related to the concert, and extensive arrangements were made.

“Concern regarding the volume of the music, however, was not raised at the time,” he shared. “The stadium has hosted concerts many times in the past and we had not received any significant complaints about the volume prior to this event.”

“This is a matter that we take very seriously,” said Mayor Miller.

Committeemen Lichtenstein and Akerman instructed the local Police Department to measure the noise level of the music to ensure that it is within legal limits of the local noise ordinance.

“The later at night it is, the lower the music must be, according to local laws,” explained Committeeman Lichtenstein.

The concert organizers did not need any permits from the town to hold the event. The permit required for the serving of alcohol was, in fact, received from the state.

“In addition to having the police measure the noise volume,” Committeeman Akerman told Matzav, “we were told that the speakers at the stadium will from here on be turned away from the residential areas and toward the Industrial Park, which, we were advised, would significantly help. We will continue to monitor it and work to ensure that the quality of life of local residents remains uncompromised.”