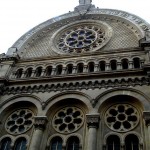 The Grand Synagogue of Paris shuttered ahead of Shabbos on Friday night in the wake of a series of terror attacks across the city, including one siege on a Jewish market by an Islamic extremist, the JPost reports.

The shul was evacuated during the event, Le Monde reported on Friday, and did not reopen for davening on Friday night.

Friday’s closure marks the first time since World War II that the shul, a Paris landmark, was not open for davening on Shabbos.

“The Jewish community feels itself on the edge of a seething volcano,” said Dr. Shimon Samuels, the Paris-based director for international relations at the Simon Wiesenthal Center. “Hostages in a kosher supermarket held [up] by an African jihadist, who reportedly already killed two victims… The scenes are out of a war movie,” he said. “But the war is undeclared as long as the sickness is not publicly named as a state of emergency. A culture of excuse exonerates the perpetrators as ‘disaffected, alienated, frustrated, unemployed.’ No other group of frustrated unemployed has resorted to such behavior. Until politicians and media define the problem as jihadism, remote-controlled from mosques in France and not only the Middle East, the cancer will not be isolated and destroyed. The seething volcano is covered by a flimsy blanket of denial. The Jewish community knows only too well the impact of an explosion. We pray this Shabbat for the hostages and calm for next week.”