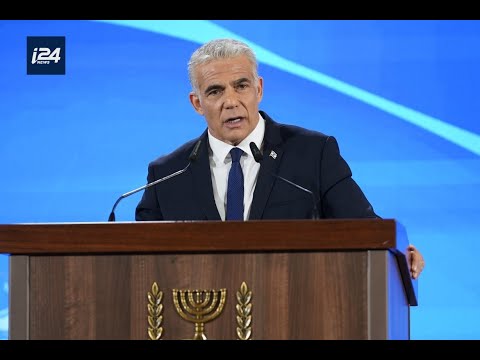 i24 News – Israel’s Prime Minister Yair Lapid told the United Nations General Assembly today that the creation of a Palestinian state will be the “right thing for Israel” on condition that it will be a “peaceful one.”

Lapid said that a large majority of Israelis support the two-state solution, himself included.

“An agreement with the Palestinians, based on two states for two peoples, is the right thing for Israel’s security, for Israel’s economy and for the future of our children,” the prime minister stated.

He added that the only condition for the creation of a Palestinian state is that it “will be a peaceful one. That it will not become another terror base from which to threaten the well-being, and the very existence of Israel. That we will have the ability to protect the security of all the citizens of Israel, at all times.”

“We can build your future together, both in Gaza and in the West Bank. Put down your weapons and prove that Hamas and Islamic Jihad are not going to take over the Palestinian state you want to create,” Lapid stressed, calling for the release of Israeli citizens being held by Hamas in the Gaza Strip.

The prime minister also addressed the Iranian threat, urging the world to put a “credible military threat on the table” to prevent Tehran from getting a nuclear weapon.

“We will do whatever it takes: Iran will not get a nuclear weapon. We will not stand by while there are those who try to kill us,” he underlined.

”It needs to be made clear to Iran, that if it advances its nuclear program, the world will not respond with words, but with military force. Every time a threat like that was put on the table in the past, Iran stopped, and retreated,” Lapid said.