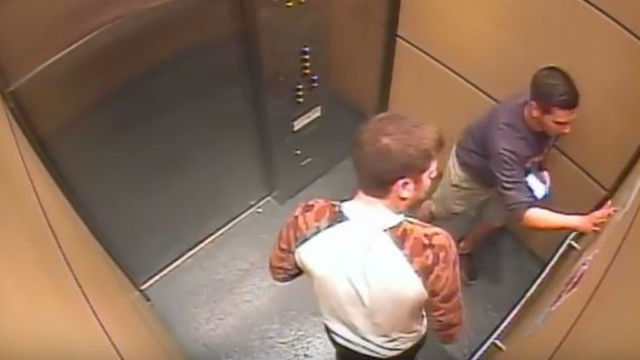 The tape, which was posted on YouTube last week, shows the young men entering the elevator of the Casa Italiana residence hall. One of the culprits then coats his finger with blood from an open wound on his leg and vandalizes the elevator with his friend.

According to the San Francisco Chronicle, other slurs were also found in the same building.

Rev. Michael Engh, the president of the school, said in a statement that “the scrawl of a swastika in a residence hall reminds me of the terror of that symbol I have heard expressed by survivors of the Holocaust.”

“Such actions violate our value of solidarity with all persons, based on our shared humanity, and, I should add, as children of a loving God. I encourage you to not stand idly by and ignore what has happened, but to discuss openly why such attacks of hatred are reprehensible,” Engh said.

Speaking to local news station ABC 7, SCU student Katie Golding said, “It’s just a scary thing to think that the people you live with, so close, can feel such harsh feelings about your community.”

“The idea of even like, drawing a swastika, I don’t know who thinks of that as a joke, or funny,” SCU student Kayla Goldsmid told ABC 7. “I just think it’s so offensive to people.”

The two students, the Chronicle reported, are now under investigation by the Santa Clara Police Department. Both will face a university hearing to “determine the appropriate sanctions for anyone found responsible for violating the student conduct code,” said SCU spokeswoman Deepa Arora.

The school, a Jesuit college in central California, said it has also launched an investigation into the CCTV footage leak.

The incident is the latest in a string of antisemitic incidents on US college campuses. According to a recent watchdog report, during the first half of 2016, 52 percent of 113 schools examined had experienced the phenomenon — up 58% from the same period last year.

Watch the CCTV footage below: