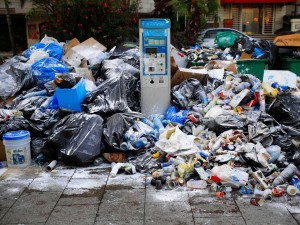 Renewed violence erupted Sunday just hours after Lebanese Prime Minister Tammam Salam suggested he might step down in the wake of ongoing violent protests since Saturday. According to the Lebanese Red Cross, 402 people were treated for injuries and exposure to tear gas.

Frustration has boiled over in Lebanon due to a political stalemate that has resulted in projects being frozen, while political factions feud over who gets to take them on. The piles of uncollected trash, resulting from the Lebanese government’s failure to agree on a new landfill site, has become a symbol for the government’s dysfunction in the eyes of many citizens. Rallies have been held featuring the slogan “You Stink.”

The protests also represent a wider political schism in Lebanon. Retired general Michel Aoun, who wants to assume the presidency, represents his country’s Shi’a Muslims and about half of its Druze and Christian population. Lebanon’s Shi’a Muslim community is known to be backed by Iran, which also supports the Lebanese terror group Hezbollah. On the other side of the equation, the country’s Sunni Muslims as well as the other half of its Christians and Druze are backed by Iran’s chief regional rival, Saudi Arabia.

“We are ruled by corrupt losers. All of them—warlords, legislators, and ministers—are working for their own interest and not those of the people,” said Nada Qadoura, who took part in Sunday’s protest, the Associated Press reported. “The will of the people will eventually succeed no matter how long it takes.”