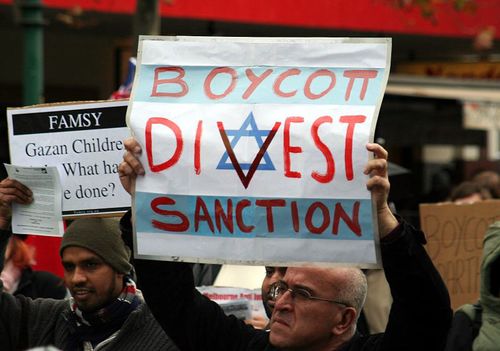 Two dozen Spanish city councils are facing legal action for promoting “antisemitic discrimination” by endorsing the boycott, divestment, and sanctions (BDS) campaign against Israel, a Madrid-based group behind the lawsuits said this week.

ACOM said the city councils in questions have approved measures describing themselves a “Space Free of Israeli Apartheid,” in support of BDS. The declarations amount to discrimination “for reasons of race, religion, beliefs or national origin,” in violation of the Spanish constitution, according to the group.

The legal actions, began in the first quarter of the year, were taken against city councils that are largely led by the far-left Podemos party and other “extreme left political parties that promote institutional incitement of hatred and the discrimination against Jews,” ACOM said.

ACOM and others opposed to BDS have repeatedly responded with legal challenges to the campaign in Spain, where multiple municipal-level resolutions targeting Israel were passed in recent years. The group is behind a recently-admitted criminal complaint lodged against BDS leader Omar Barghouti and local councilors and supporters in Cadiz, a port town in southwestern Spain.

An administrative court had earlier ruled that the City Council of Cadiz had violated four fundamental rights enshrined in the Spanish constitution by nixing an Israeli film festival while adhering to the BDS campaign.

In June, the High Court of Justice in the northwest principality of Asturias determined that a boycott resolution passed by the City Council of Castrillón violated constitutional rights. The same court initially issued a judgement against BDS in 2016.

ACOM says it “has managed to legally annul more than 40 agreements of adherence to BDS” to date.