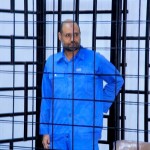 Saif al-Islam, the son of former Libyan leader Muammar Gaddafi, has been sentenced to death by firing squad. Saif, who was accused of war crimes and suppressing peaceful protests, was sentenced in absentia Tuesday along with eight other members of his father’s regime. Gaddafi was overthrown and killed in a revolution in 2011.

Saif is being held by a rebel group that opposes Libya’s government, and it is unclear if or when they will hand him over to the court. Read more at Al Jazeera.